Former Saudi Arabian journalist, editor and Kingdom insider Jamal Khashoggi argued that Jews have no roots in historic Palestine, that one must be know how to speak to the Jews when meeting them and that they are conspiring to divide Al-Aqsa, in tweets between 2011 and 2018. The tweets, still online as of April 14, 2019 show a pattern of anti-Jewish views that even hinted at references to the anti-semitic Protocols of the Elders of Zion and complained that the West had laws preventing Holocaust denial.

Jamal Khashoggi was a well-known Saudi Arabian media titan with close relationships to the Kingdom’s diplomats and public relations apparatus before he fell out with the leadership, left the country and began writing abroad in 2017. A columnist for The Washington Post, with close links to Qatar and Turkey, he was murdered in October 2018 in the Saudi Arabian consulate in Istanbul, allegedly at the direction of the highest levels of the Saudi government.

Khashoggi was heralded as a dissident journalist after his murder, but his views on the Middle East were more controversial at home. He argued against Riyadh’s turn against the Muslim Brotherhood. In an interview with Al-Jazeera in November 2017 he said Saudi Arabia needed to return to its religious roots and have alliance with political Islam and the Brotherhood. According to the article, he said Riyadh should work more closely with the Palestinians in the struggle against Israel.

Text of November 24, 2017 interview with Al-Jazeera

It is now clear that his views of Israel were deeply entwined with his negative views of Jews and he harbored traditional anti-semitic and conspiratorial views. A survey of his tweets in Arabic reveals his worldview, as it developed over time. In 54,000 tweets since 2009 to what was eventually up to 1.7 million followers, he rarely mentioned Jews, but when he did it was consistently negative. Only thirty references were found, but they present an important insight into his controversial views. He also had some genuine interest in the makeup of Israel, tweeting about the role of Iranian Jews in Israel in June 2011. In a tweet that same month he writes about the “desperation of the Jews to deny the Protocols.” Belief in the anti-semitic forgery of the Protocols of the Elders of Zion was common in the Middle East in both Arab nationalist and Muslim Brotherhood circles up until the present. Both Gamal Abdel Nasser and Hamas pushed conspiracies regarding the text. These conspiracies have also been advanced by Malaysian President Mahathir Mohammed in a 2003 speech to the Organization of Islamic Cooperation. As such, Khashoggi would have been familiar with this view.

In December 2011 and July 2012 he references the marginalization of Jewish women by “religious Jews” and the “superstition of the Jews” in reference to Israel and prayers at the Kotel in which he calls Jews “deceivers” or “swindlers.” In August 2012 he argues, in relation to Israel, that “there is no land that God has made for a people,” noting that while Jews defeated the Canaanites, the Romans defeated them and it was Muslims who made the land “for all religions.” He was skeptical of Jewish heritage in the land of Israel, a theme that returns several times in his tweets. In July 2014 he referred to Jews in Israel as “usurpers,” implying they had stolen or occupied the land.

In September 2012 when a controversial anti-Islamic video in the US led to riots in Egypt and Libya and the murder of the US ambassador in Banghazi, Khashoggi was asked why it was permitted to have a film critiquing Islam, but not the Holocaust in the US. “The reason is that the Jews passed legislation that criminalized the [questioning] of the Holocaust while even Catholics failed to criminalize the abuse of Christ.” On September 13, 2012 he tweeted “if this was skeptical of the Holocaust, America would not allow it to be published because the Jews succeeded in obtaining a law that would prevent it in America and Europe.” There is no such law in the US preventing Holocaust denial, but Khashoggi used the false claim to attack Jews.

Khashoggi was a passionate supporter of the Arab spring protests, including the rise of the Muslim Brotherhood in Egypt, and the opposition to Bashar al-Assad’s regime. In a November 2012 tweet he compares Hamas fighting Israel to the Syrian rebels, comparing Assad’s power to Israel and implying that “everything can be ended by the rule of Assad and the rule of the Jews.” In each case of discussing Israel Khashoggi does not see Israel or Jews in the US or other places as separate or individual, they are “the Jews,” in his worldview. In September 2013 he tweeted that Jews were being “pumped up” with a proposal to divide Al-Aqsa mosque in Jerusalem, spreading the conspiracy that Israel seeks to destroy the mosque and take over the Temple Mount.

“The Jews have no history in Palestine so they invented the Wailing wall which is a Mamluk building and after 1967 saw the tomb of Joseph in Nablus and they decided to take it,” Khashoggi wrote in October 2015. It was one of two tweets arguing that the tomb of Joseph near Nablus was a “Jewish lie” and that it had been built in the Turkish era, according to Khashoggi. The actual tomb was once both a Muslim and Jewish holy site. It was partly destroyed during the Second Intifada. It was against burned by Palestinian rioters in October 2015, causing Khashoggi to tweet about it. He argues that Jews have invented an entire history in Palestine, which seems to go against an earlier tweet in which he had said Jews came to Palestine after the Canaanites. Arguing that the Western Wall of the Temple Mount was constructed in the Mamluk era of the 13th century would seem to contradict the fact that the Al-Aqsa mosque, which is above the wall, was constructed in the 8th century.

Khashoggi’s October 2015 tweet claiming there is no Jewish history in historic Palestine, led to an exchange with another Twitter use named Jawad al-Hashimy. “Jews without history in Palestine! Sir, your knowledge of history is like my knowledge of the Korean language.” Khashoggi responds that the man should “go and look with them [the Jews],” they have hunted long and found nothing.” When Hashimy notes that Islam took the name for Jerusalem from Jewish tradition, Khashoggi responds “what a shame, Muslims have not stolen anything from the Jews, and I think you are a Muslim proud of your identity, don’t provoke me any more.”

The last tweet about Jews from the insider-turned-critic, was in response to a question about Turkish President Recep Tayyip Erdogan meeting with Jews in the US. A photo shows the Turkish president meeting members of Jewish organizations in September 27, 2018. “Your comment, Mr. Jamal?” queries another Twitter user. Khashoggi responds that meeting with Jews is “normal behavior, no comment. The Leaders of the Americans Jews are influential and everyone meets with them. I personally delivered a lecture at the American Jewish Committee; what to say when we meet with them.” He seems to imply that it is important to consider how to speak to influential American Jews, in contrast to how one might speak elsewhere.

Khashoggi’s view of Jews was shaped by his environment. He was born in 1958 in Saudi Arabia and growing up in a time when the Saudi textbooks contained anti-semitism, an issue the Anti-Defamation League and US State Department have noted in the past. Saudi Arabia has sought to reduce anti-semitism in recent years, but it would have been readily available to someone like Khashoggi not only at home but also abroad. Khashoggi was particularly critical of Israel and opposed any softening of Riyadh’s stance regarding Israel, an issue that led him to leave the Kingdom and speak out in Qatar and Turkey. He referenced this issue in May 2018 at The Washington Post, asserting the Kingdom was having “discussions about an alliance with Israel to counter Iran.” But in his columns his terminology, referring to Israelis as “Jews” or attacking Jews as “usurpurs” and swindlers, was not present. 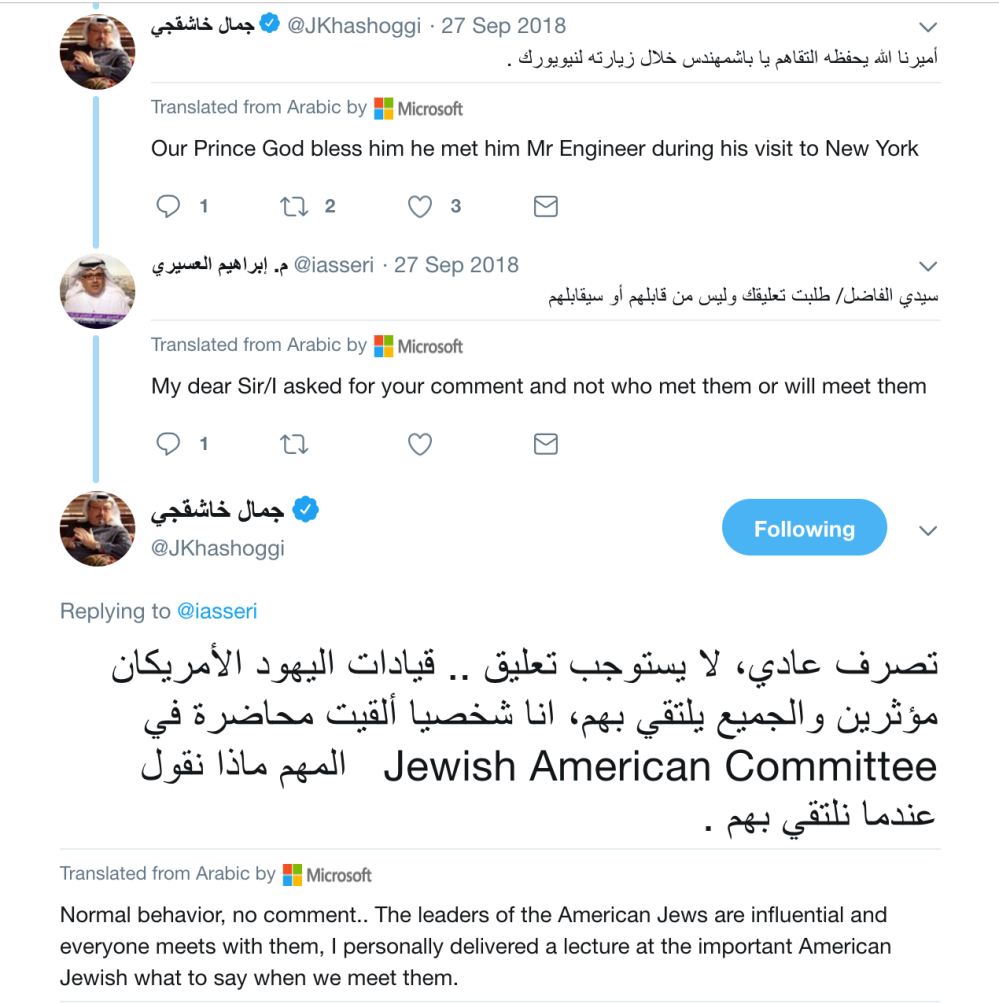 Khashoggi was careful online in his discussions, not elaborating on his reference to the “Protocols,” but his decision to claim that “Jews” had passed legislation in the US preventing Holocaust denial was false. He also bought into the idea that Jews “lie” about the history of Judaism in Jerusalem, a claim that is in line with anti-Israel propaganda asserting the Western Wall and other historic Jewish sites are fabricated. Whether he altered his views after leaving Saudi Arabia and becoming more involved in writing in the US is unclear, it does appear he reduced his references to “Jews” on social media.