A version of this article appeared at The Jerusalem Post

Iran is constructing a new military compound and weapon storehouses, according to a report at Fox News based on analysis from Image Sat International. “According to security experts, this is the first time that the Iranian military is building a base of this scale from scratch in Syria.” It is all taking place near Albukamal, a border town that is adjacent to Iraq’s Al-Qaim. This area has now taken on particular significance as a hub of Iranian activity linking Iraq and Syria and playing a key role in Tehran’s regional ambitions.

It wasn’t always that way. In June 2014 a branch of Al Qaeda that was active in Albukamal pledged allegiance to Islamic State and paved the way for the group to exert control over the key border crossing. This area had been abandoned by the increasingly weak Syrian army and Iraqi  army on the other side which were facing off against ISIS and other groups. It was a vacuum. After two years, in June 2016, the US and its Syrian rebel allies set their sights on liberating Albukamal from ISIS.

In a now largely forgotten battle, the New Syrian Army launched an offensive against the area. Sam Heller wrote at the time, “after initially training in Jordan, the NSA captured the southern desert outpost of al-Tank from the Islamic State in March [2016] and established its base there.” It received backing from the US and with just 150 men attacked Albukamal on June 28,  2016. The American-backed group was badly defeated, scuppering US plans for a Syrian rebel success story that might liberate areas in Deir Ezzor from ISIS. The rest is largely history. The US shifted more support to the mostly Kurdish Syrian Democratic Forces, and the Syrian regime ended up liberating Albukamal from ISIS in November 2017.

This is the situation Albukamal finds itself today. Controlled by the Syrian regime it sits on one side of the Euphrates while the US-backed SDF are on the other side, north of the Syrian army positions. South of Albukamal is the lonely desert outpost of Tanf, where US forces are still stationed. So Albukamal is part of a kind of strategic corridor from Iraq to Syria for groups that support the Syrian regime, and  especially for groups that are aligned with Iran and Hezbollah.

The battle for Albukamal in 2017 united elements of the Syrian army with Iraqi-based Shi’ite paramilitary groups. Kata’ib Hezbollah, a member of the Hashd al-Shaabi or Popular Mobilization Forces, entered Syria from Iraq to help retake Albukamal. Then it decided to stay in Syria. This group is run by Abu Mahdi al-Muhandis, an Iraqi who served alongside Iran’s Islamic Revolutionary Guard Corps in the 1980s when Iran was fighting Saddam. He was accused of terrorist offenses in Kuwait but has become a key player in post-ISIS Iraq where his group is one of many influential paramilitary groups that are now official government forces, as well as being sectarian political parties.

In June 2018 a mysterious airstrike eviscerated a Kata’ib Hezbollah base near Albukamal, in Syria. Kata’ib Hezbollah members initially blamed the US, but the US said it had not carried out the attack. A report at Al-Jarida claimed Israel had carried out the strike. A July report from Image Sat International noted the “presence and the involvement of the Iranians and the Shiites in this area are not hidden, on 30 June 2018 an Iranian intelligence delegation and the ‘Popular Mobilization Committee’ visited the destroyed site.” Maps, satellite images and photos accompanied the report, showing the destruction caused by the airstrike.

In May 2019 FoxNews reported on more exclusive images from ImageSat International that showed a “new border crossing controlled by Iran” at Albukamal. ISI assessed in August that airstrikes in Iraq, and at Albukamal were “aimed to destroy the Iranian land bridge from Tehran to Syria and Hezbollah.” 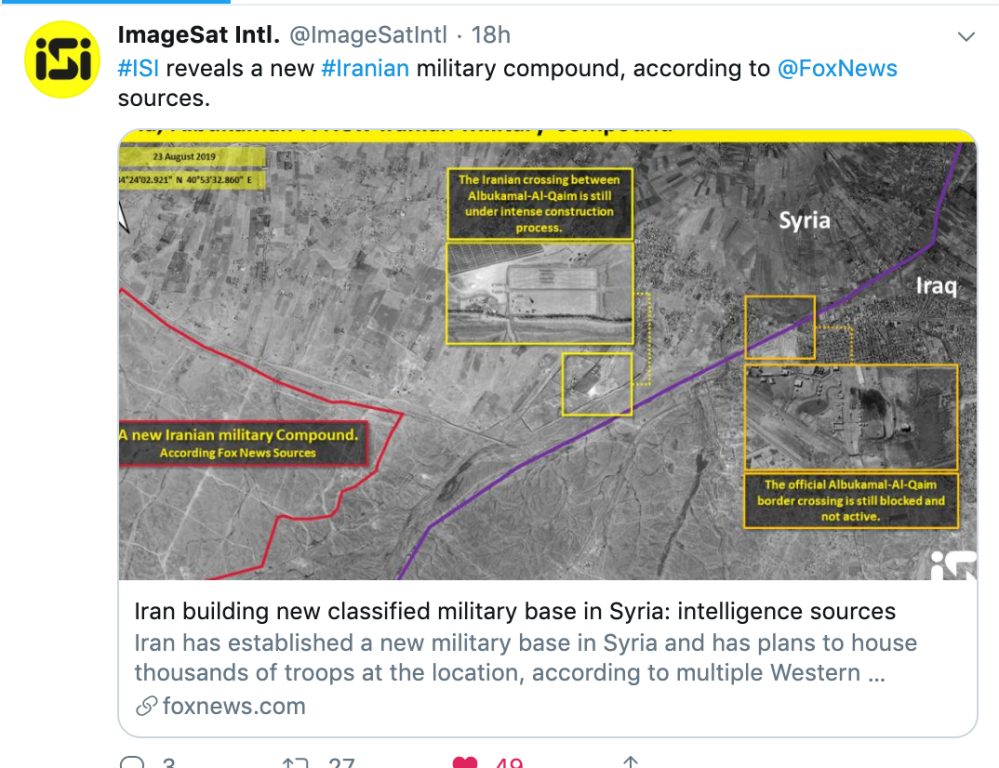 This is the context of the September 3 report about Iran’s new base at Albukamal. The report comes in the context of three linked crises related to Iran and its allies in the region. First, up to five mysterious airstrikes in Iraq between July 19 and August 25 that ranged from Amerli near the Iranian border to southern Baghdad and near al-Qaim. Second, the August 24 airstrike by Israel on a Hezbollah and IRGC “killer drone” team in southern Syria. Third, Hezbollah’s claim that two Israeli drones crashed in Beirut on August 25 and the subsequent information published by Israel detailing Hezbollah’s precision missile program, which is backed by the IRGC.

The Albukamal hub of Iran’s land-bridge influence includes possible housing for precision-guided missiles, according to analysts at Image Sat International. The airstrike on a convoy near Al-Qaim on August 25 killed a member of the PMU’s 45th brigade. Abu Mahdi al-Muhandis, the same Muhandis who runs Kata’ib Hezbollah, paid a condolence call to the family of the the man who was killed on September 2.

The only question about Albukamal today is when the border crossing will become active. It is supposed to be a major official border crossing and work has been done on both sides to make it one. However the larger picture of bases being built, militias crossing back and forth and a kind of highway of pro-Iranian power using the area as a junction illustrates Tehran’s larger ambitions in the region. The only issue is that Albukamal is bracketed by US forces in Tanf and across the Euphrates. When US President Donald Trump said in December 2018 that the US would use Iraq to “watch” Iran there was alarm in Baghdad. Iraq doesn’t want the ISIS war to end with a new conflict between the US and Iran in Iraq. Already a simmering conflict between Iran and its adversaries is taking place in Syria. Albukamal is now very much a key to that simmering conflict.