Between Tuesday morning, November 12, and Thursday morning, November 14, Israel fought a short conflict with Palestinian Islamic Jihad. Its context is more than a year of increasing tensions with the group, which threatens Israel from Gaza. Although PIJ is smaller than Hamas, which runs the Gaza Strip, it has freedom to conduct operations and is not burdened by having to rule ad run Gaza like Hamas is. In that sense it is more nimble. With Iranian support it acquired and improved its rockets since 2012. Since last year it has been responsible for some of the major escalations with Israel, firing numerous barrages of rockets.

Israel has gotten used to these escalations with both Hamas and PIJ. In October and November 2018 there were incidents involving hundreds of rockets fired.  In November 2018, more than 460 rockets were fired. And in May 2019 another 400.

A briefing with foreign press by Jonathan Conricus, the International Spokesperson of the IDF discussed some of the other elements of the last days. 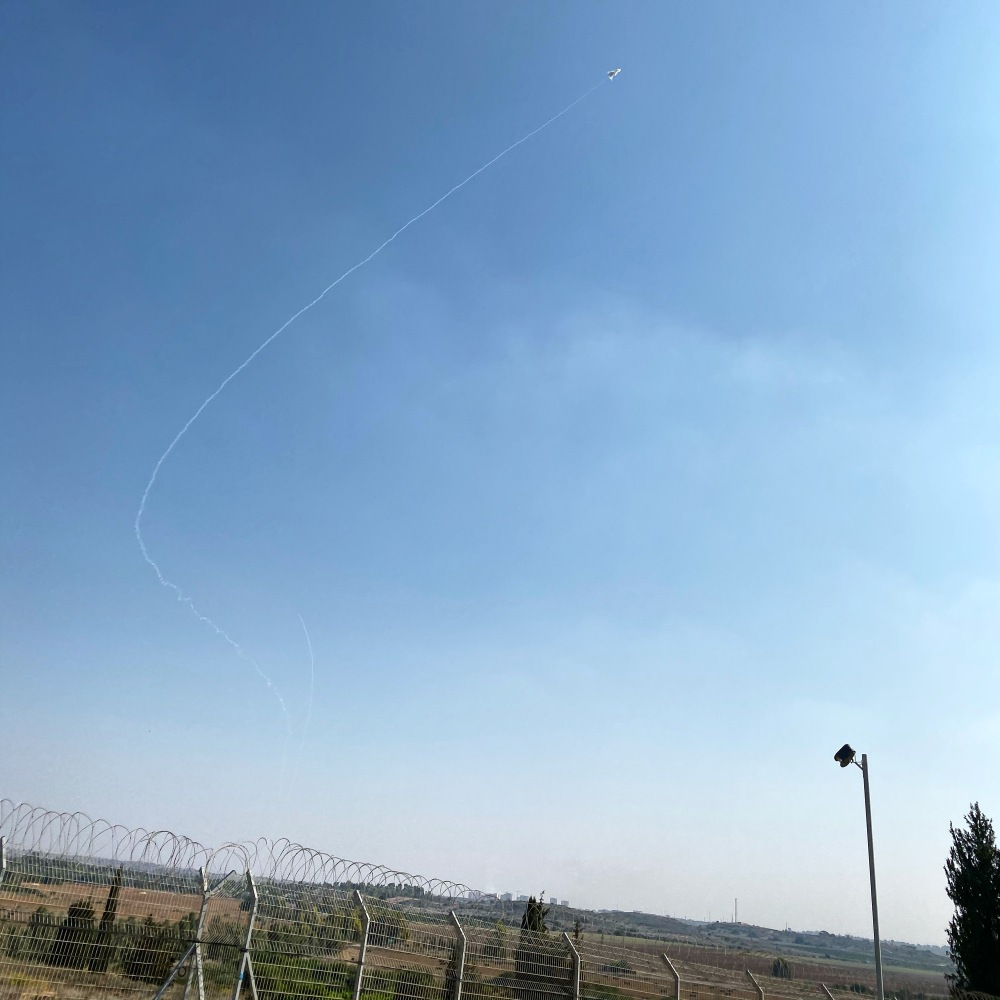 A rocket is intercepted over Netiv Ha’Asara (Seth J. Frantzman)

Name of plan was Black Belt, it was planned for some time, a few months, gathered intel, ad eliminated Bahaa Abu al-Ata, there was extended effort diplomatic and other means to persuade Al-Ata from continuing his hostile activities and trying to execute attacks, it was decided the days ago to eliminate him, to stabilize the area and to get a obstacle for stability and different diplomatic arrangements to get that problem out of the way.

We distinguished between Hamas and Islamic Jihad, measured, proportionate and focused only on military assets of PIJ. We will release data on that. The cornerstone of the operation in eliminating Al-Ata, close coordination with the ISA (Shin bet), that made it successful. We knew Bahaa was a ticking bomb, planning additional attacks, including an attack in coming days.

That is why it was decided to take him out. The aim of Black Belt was to improve security situation by delivering a blow to PIJ and creating deterrence, we wanted to keep Hamas out of the fighting ad stabilize situation in and around Gaza with influence on Israel. Our assessment shows we dealt a significant blow to PIJ capabilities. 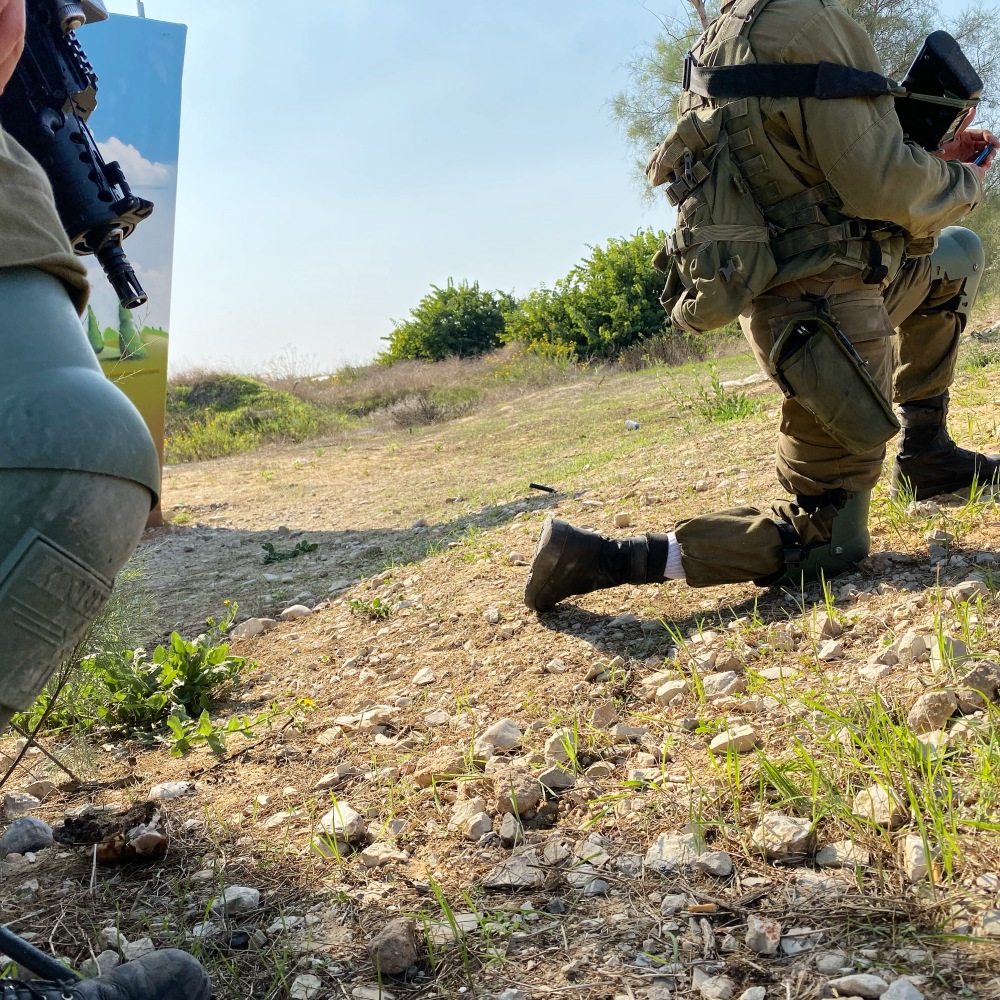 Soldiers on the border of Gaza secure a road near an Israeli community. (Seth Frantzman)

Hamas says that there was an “ongoing Israeli aggression against the Gaza Strip, which has led to the death of more than 25 Palestinian civilians, the injury of dozens, and the demolition of several houses.” However Israel notes the following:

We have been able to strike between 23-25 operatives/combatants/terrorists, either in action firing at Israel or preparing and we struck various targets, infrastructure and underground facilities and two attack tunnels and components that support rocket manufacturing and naval assets of PIJ and other command and control elements and combat components, all of them Islamic Jihad. Very little collateral damage. Minimal amount of non-combatants affects. That guided our decision to take him out, the small number of non-combatants that were near. Throughout the operation we used a special task force and HQ situated in Gaza division which is a HQ combining intel, air force and ISA other offices. Tasked with direct targeting and quick closing of circles in terms of intel-and immediate adequate munitions to strike a live target. As we demonstrated over last days, quite a few rocket launching squads were eliminated while operating.

Conriicus says that “We enhanced our ground defense and had other air defense on stand by. 450 rockets were fired. 90% intercept rate by Iron Dome. We used only limited capabilities.”

This means that Israel was precise and careful and did not target “Hamas, or Shi’ite militias in Syria, but specific capabilities of PIJ. We used a small amount of our capacity.”

Israel on alert in the north

We speak about Gaza, but we CANNOT overlook focus on the north, we are on HIGH ALERT and ready for various scenarios, we under Iranian forces and proxies as we speak are trying and preparing various attacks against Israel from various geographic regions, not limited to Lebanon and Syria, we understand this is the situation and we are operating and preparing accordingly. Bottom line: We will focus on the north and stabilize the south and we are ready to respond to any threat to civilian population.

Conricus was asked about some other issues, such as a strike in Deir al-Balah that killed some civilians, according to reports.

Usually Israel holds Hamas responsible for what comes out of Gaza, is there a new policy?

We have been coherent and consistent that the aim of the operation and plan was aimed at improving the security situation in southern Israel and stabilizing Gaza. Bahaa Abu al-Ata was a destabilizing entity, and Hamas would say that as well off the record, he interfered with Hamas and other efforts to stabilize the region. So I wouldn’t say it is a significant change in strategy, we hold Hamas responsible for the Gaza Strip and they are the governing terror organization of Gaza. But Bahaa Abu al-Ata was singled out for his activity, plans.

Some Hamas elements did participate though?

What we understand is that it appears local initiatives not sanctioned by chain of command, we saw that PIJ was the one firing rockets.

Israel will continue to confront protests on the Gaza border and also has not taken off the table further targeting of commander. Hamas wants the naval blocked ended and other changes. But so far that has not happened.

It is now clear how much of the PIJ strength was eroded. It has up to 8,000 rockets and numerous members.

We are assessing that. We are assessing how much damage we inflicted on the organization and how much of their rocket arsenal was depleted. The preliminary assessment is that they were dealt a blow, a blow in manufacturing capability, we will continue to assess. Unfortunately they have an arsenal of thousands of rockets of varying ranges capable of covering most of populated Israel including north of Tel Aviv and to Jerusalem.