The building of new mosques has become an issue throughout European cities, from Munich to London. In some places, such as Italy, Switzerland and Greece, governments have struggled to prevent their erection. Yet while there is controversy over their very construction, there is usually very little questioning about why they are built where they are built.

A survey of historical placement of mosques in important cities and newly conquered Muslim lands, as well as a survey of the placement of mosques in diverse neighborhoods, shows that their placement is anything but random and that strikingly often they are built next to the houses of prayer or the neighborhoods of non-Muslims. Across the Middle East and the Muslim world the existence of the minaret is taken for granted. Sometimes square and stout as they are in North Africa, or tall, skinny and cylindrical as they are in Turkey and Eastern Europe, they are the symbol of the Muslim world. Yet their commonness leads people to take them for granted.

According to architecture historian Prof. Keppel A.C. Creswell, the minaret was first developed after the Umayyad dynasty (661-750) came in contact with church towers of the Syrian Orthodox Church. Photos of old Syriac churches show what appears to be a conical tower identical to a minaret. Creswell claimed that “having heard that the Jews used a horn and the Christians a naqus or clapper, [Muslims] wanted something equivalent for their own use.” The Umayyads also were the first to construct mosques atop or next to famous Christian and Jewish holy sites. In Damascus they turned the Church of St. John the Baptist into a mosque between 705 and 715.

In 638 when Caliph Omar prayed near, but not in, the Church of the Holy Sepulchre in Jerusalem, he noted; “If I had prayed in the church it would have been lost to you, for the believers [Muslims] would have taken it saying: Omar prayed here.” He was prescient, for the Mosque of Omar was eventually built directly opposite the 13th century entrance to the church. Also in Jerusalem construction was begun on the Aksa Mosque in 690. It was constructed over what had been the Church of Our Lady and before that, the Jewish Temple’s storehouse. 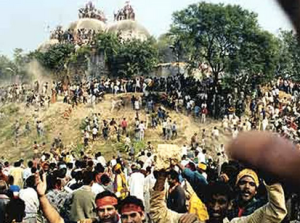 The demolition of the Babri Masjid in 1992

THE MOSQUE and its minaret are symbols of power. The giant brick tower of Qutb Minar in Delhi is 72 meters high and until recent times was the world’s tallest minaret. It was constructed by the sultans of Delhi to celebrate their victory and conquest of the city. Even in more obscure locations, the building of minarets has served as an expression of power and influence. The center of the Jewish Quarter of the Old City of Jerusalem has long been the Hurva Synagogue which was constructed and reconstructed several times between 1700 and the present. But attached to this great synagogue is a mosque whose minaret is intentionally taller than the Hurva’s dome. The America Colony Hotel in Sheikh Jarrah has a mosque next door to it.

The Western Wall of Jerusalem has a mosque perched atop its northern end. The Mount of Olives Jewish graveyard has a mosque which adjoins it. Jeremiah’s Grotto in east Jerusalem, which was for a long time a pilgrimage site, now obscured by the east Jerusalem central bus station, also has a mosque at its entrance. The Church of the Nativity in Bethlehem has a large mosque just across from it on Manger Square, constructed in a town which at the time was 80 percent Christian. A controversy over Muslim attempts to build a mosque next to the Basilica of the Annunciation in Nazareth led to riots in 2002. In each of these cases the mosques were built after the non-Muslim building was constructed. 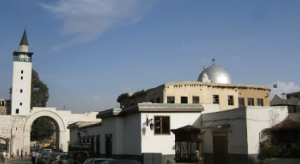 A church and mosque next to eachother in Syria

The building of mosques is not always an expression of power, but historically and today in mixed communities mosques are constructed with a view toward the non-Muslim other. This author is even familiar with a family of Palestinian communists in the West Bank where a mosque was, not coincidentally, constructed next door to their house. It becomes blatantly obvious in a community like Sheikh Jarrah in east Jerusalem, where almost every other mosque is situated next to a Christian building or former holy site. The next time one sees a mosque, he should not take it for granted. Many of them have a history and geographical placement that is not coincidental and which serves as an expression of political Islam and its aspirations. The writer, a PhD student in geography at the Hebrew University, runs the Terra Incognita blog. sfrantzman@hotmail.com