Conrad Schick arrived in Jaffa in 1846. Born in the village of Bitz in the old German kingdom of Wurttemberg, his sharp mind brought him to the attention of Christian Fredrich Spittler, a clergyman who had a plan to revive the Holy Land, to bring the gospel to the East, and he needed missionaries. So he settled on the Schick to create a German Protestant foothold under the auspices of St. Chrischona Pilgrims Mission.

It doesn’t seem it was ever Schick’s destiny to convert the East. However his arrival in Jerusalem was to revolutionize the city in another way, through his architectural creations. It is not clear what professional training Schick had in architecture, but he had a keen eye for detail. He taught himself locksmithing, mechanics and watchmaking, and became a qualified amateur archeologist, scholar on the Holy Land and model maker. 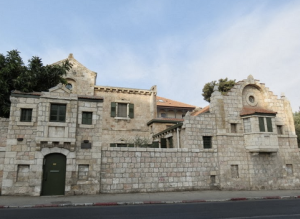 Initially he worked out of a bruderhaus, a fraternity, that he rented with other missionaries. Lonely and quiet he tinkered on his clocks while the other brothers worked at soap making and other crafts.

He apparently wrestled with fears that he was becoming too worldly. It seems the death of his patron, Spittler, in 1867 may have freed him from his obligations. Or perhaps his finances ran low. In that year he took on a commission to excavate an area around a tomb that was to become the famed Garden Tomb in east Jerusalem, which some Protestants believe to be the true holy sepulchre.

Schick planned several Jerusalem neighborhoods, among them Mea She’arim, which was constructed in 1874, and the Bukharan Quarter. He designed the Bukharan Quarter to look like a European neighborhood, with wider streets than was then common in Jerusalem. His plans for Mea She’arim called for open spaces and courtyards and the use of the most modern technologies, such as street lights. Not all of his ideas were incorporated, but he left an indelible mark on both neighborhoods.

SCHICK DESIGNED beautiful buildings as well. In 1882 he built a house for himself on Rehov Hanevi’im, an unforgettable gem, which he called Tabor House. He designed Jesushilfe in 1867, a leper hospital in Talbiyeh that was run by a German organization. In the same year he began supervision of the construction of Talitha Kumi, a Christian girl’s school that once stood next to Hamashbir on King George Avenue. The building was considered of such architectural value that when it had to be torn down to make way for modern works, its façade was preserved.

His work on St. Paul’s Anglican Chapel on Rehov Hanevi’im is considered a gem of Victorian “gingerbread” style. He also designed part of the German Deaconess Hospital, which is now the eastern wing of Bikur Cholim. Schick dedicated his life to Jerusalem and died there in 1901.

His architectural gingerbread was followed by Antonio Barluzzi’s often neo-renaissance style pilgrimage churches. It seems that, like Schick’s overall influence in 19th century Jerusalem, no great Catholic building was built in the land of Israel without Barluzzi’s hands having been dipped into the mold. Born in 1884 in Rome, his life did not seem destined for architecture. He obtained a degree in engineering and spent time in the army overseeing archeological excavations. For a while he worked as a builder, rising to director of construction before enlisting once again during World War I. He became a chaplain and somehow got himself torpedoed off the coast of Gaza and ended up in Jerusalem in 1918.

For the next 42 years until his death, he designed and restored some 24 major churches and Christian institutions, from the Church of the Visitation in Ein Kerem to the Church of Beatitudes that overlooks the Sea of Galilee. Later he wrote: “Whenever possible – as now – it is the duty of all Christians to save these relics and to give them the honor that is due. And in this I do not believe that too much can be done, since no materials or work could be precious enough to be worthy custodians of such holy treasures.”

IF SCHICK devoted his energies to designing original structures and neighborhoods in Jerusalem, and Barluzzi devoted his religious faith to the Church’s attempt to reclaim the holy sites, then Ram Karmi’s achievement has been to translate the socialist pragmatism of Zionist planners into reality. Karmi was born in Jerusalem in 1931, served in the army and studied at the Technion and in London. The son of an important architect, the discipline ran in his veins and it was his expertise.

Like Schick and Barluzzi, his hands reached wide and he grasped many of the great projects of his day, from playing a role in the design of the Knesset, to building that great beast known as the new Central Bus Station in Tel Aviv. He was the chief architect of the Construction and Housing Ministry until 1979, built the Supreme Court and has been hired to restore the famed Habimah Theater in Tel Aviv.

In contrast to Barluzzi’s neo-renaissance style that sprang directly from his faith and Schick’s tinkering, Karmi has been devoted to the Brutalist style. There is nothing more brutal than to behold a Karmi building. Endless reams of concrete flow across the landscape coming together in imposing fortress like structures. The Central Bus Station in Tel Aviv, one of the most horrid large buildings in the world, is a monument to the fact that the person who designed it probably never envisioned using it himself. 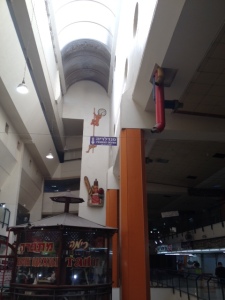 And this is the tragedy of the country’s Brutalist architecture. It escaped the roots from whence it springs, the people, and devotes itself to the stringent socialist belief in the way people “should” live. This is the essence of the planned neighborhoods. Consider the difference between the buildings that Schick hoped to bequeath to his Jewish clients, the courtyards and open spaces, and the ugly decaying tenements the Brutalists have designed for millions of new immigrants. As Paul Barker and Philippa Louis argued in The Freedoms of Suburbia: “It is about the way people wish to live. Why should their wishes be trampled on, in the name of the plan?”

Zionism has put down roots in the Holy Land in the shadow of three great architects, one who loved Jerusalem, one who loved the Church in Rome and one who loved the concrete plan. We would do well to return to a Schick building and ponder what the next 100 years should bring us in terms of freedom, as best symbolized by what we build.

Central bus station, interior, like a set for a movie or short story, a dystopian vision