When Brandeis University meekly rescinded its decision to grant an honorary doctorate to Ayaan Hirsi Ali it was due to “her past statements” that were critical of Islam. Offended students and faculty and a diverse alliance of the organizations that claim to be Islamic or radical leftist tarred Hirsi Ali as an “anti-Muslim bigot,” “hate-filled extremist” and “Islamophobe.” Ibrahim Hooper called her “one of the worst of the worst of the Islam haters… worldwide.”How did a petite Somali woman become so frightening? The statements that were considered so dangerous included assertions that Islam is a “backwards religion… a destructive, nihilistic cult of death that legitimizes murder.” Her crime was claiming that “Mohammad’s example is terrible, don’t follow it.” One editorial objecting to her presence noted that she ignored that “there are multiple views of Islam, insists that violence is inherent in Islam and that one culture is fundamentally better than another.” 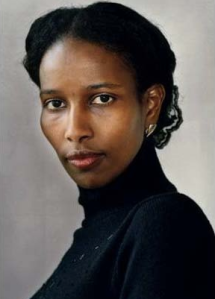 Al-Jazeera provided more nuance, noting that “Hirsi Ali was raised in a strict Muslim family, but after surviving a civil war, genital mutilation, beatings and escaping an arranged marriage by immigrating to the Netherlands in 1992, she renounced the faith in her 30s.” David Silverman, an American atheist leader, claimed “Brandeis has caved to religious intolerance masquerading as political correctness and uninvited a valuable voice in the discussion of religion in public life.”Hirsi Ali joins a long list of those impugned for “insulting the faith,” including Voltaire, Socrates and Spinoza. The key word in the modern debate is “Islamophobia.” A very crafty term, it was invented to strike the ear as similar to “homophobia” and thus foster the impression that any critique of Islam is simply an expression of bias. In this way the Islamic religion was implicitly transformed from a religion into a race or sexual orientation. Those Islamophilic supporters of Islam in the West understood that there is a vast and gloried enlightenment tradition of critiquing religion, and that to shield faith from criticism, one must pretend it is not a faith at all.This isn’t the first time the notion of “phobia” has been invented as a shield for a culture to place it above other culture and free it from criticism. A similar lobby was created in the 1880s to castigate people as “Germanophobes.” After the unification of Germany, the creation of the German High Seas Fleet, and the rise of Teutonic colonialism in Africa, many voices in Russia, France and England became suspicious of German intentions. They were said to have a “phobia,” an irrational fear of German intentions.Similarly fears of Russian expansionism were labeled “Russophobia.”

What is interesting is how the logical concern over German or Russian intentions (both were expansionist) in the 19th and 20th centuries was transformed into “discrimination” and “negative prejudice,” so that the perpetrator becomes the victim.The most fascinating example of this occurred on March 6, 1937, when the US secretary of state Cordell Hull apologized to the German embassy for comments made by New York mayor Fiorello La Guardia. La Guardia’s offense had been to suggest to a women’s gathering of the American Jewish Congress that an exhibit about Germany for the World’s Fair should include a “chamber of horrors” relating to “that brown-shirted fanatic” in Germany. He had been outspoken before, claiming the “perverted maniac” Hitler intended the “complete annihilation” of the Jews. Hull felt the need to apologize to the German government, noting that although the US had this “national heritage” of free speech, that “I very earnestly deprecate the utterances which have given offense.”While Hull was groveling and pretending that the Nazis and Hitler were the victims of “hate speech” in New York, Germanophobia, no less, the German press called La Guardia “a dirty Talmud Jew” (he was half Jewish) and a “gangster.” US president Franklin D. Roosevelt was more circumscribed, suggesting to Hull that he agreed with La Guardia. Hull said FDR should chastise La Guardia for offending the Germans. According to witnesses, FDR looked up, slapped his wrist with two small fingers and said with a mischievous smile, “we will chastise him like that.”

Rabid anti-Semites being cast as the “victims” in 1937 and needing to be apologized to for having been offended is similar to how the Islamophobia accusation works today. If you condemn honor killings, you are “hateful,” if you disagree with the death sentences handed out for blasphemy in Pakistan, you are “intolerant,” and if you disagree with women being buried up to the neck and stoned, or whipped or having acid thrown in their faces, from Algeria to Somalia, you are “Islamophobic.” It is like saying that the victims of the inquisition, in pointing out the evils of the inquisition, were “Christianophobic,” as if the Church were the true victim of intolerance.There is no reason to be hateful against Muslims. But there is no reason to turn everything that is not Islamophilia into “racism.” And this is what happens in practice. There is a confusion between Islam as a religion, and Muslims as a people. If you say that Islam is intolerant you are said to have hate for Muslims as people, rather than just for the negative aspects of the religion, as you see them. Thus outspoken critics who are Muslim, such as Qanta Ahmed, Irshad Manji, Aliaa Elmahdy, Wafa Sultan and Mona Eltahawy, are said to be “intolerant.”But the same does not go for other religions. If one says that Christianity is fundamentally intolerant, or that Judaism legitimizes murder, it is understood primarily to be a critique of the religion, not of all the believers.Islamophobia falsely posits that any critique of religion represents discrimination against people. Thus a Salon article in 2013 claimed “Dawkins, Harris, Hitchens: New Athiests flirt with Islamophobia,” even though their critique is of a religion, and not of a people.

We are asked to believe that no action is ever “Islamic,” except those that are positive. Thus, while we readily admit that the Crusaders were run by the Church and their atrocities carried out by Christians, the jihadists who bomb people from Boston to Bali are stripped of their religious motives, and any suggestion that religion imbued them with violence is disallowed.

This is the way in which those who grew up Muslim, such as Salmon Rushdie and Ayaan Hirsi Ali, were turned into the perpetrators, rather than the victims, when it is they who live in fear of being killed for their views. Can anyone imagine a situation where someone who wrote a book that mocked Christianity or described a brutal upbringing in a conservative Christian family, was subject to death threats – and was accused of being a “hate-filled bigot”? “We will not tolerate an attack on our faith” the Muslim Students Association was reported to have declared. This is the real Islamophobia: a fear of the critique of Islam, that requires adherence to the “faith” in order to be acceptable today.

Valenza Gradenigo before the Inquisitor painted by Francesco Hayez

It is a kind of inquisition, for it requires that any receiver of an honor, like Hirsi Ali, first be put to the rack to see if she has ever spoken any blasphemy or anything that goes against the faith. When we hear “Islamophobia” we should think of clergy in those awkward hoods wandering our halls, ferreting out those who “deny the gods,” as Socrates or Spinoza were accused of. Many critics of Islam are really Islamophiles; they don’t hate Muslims anymore than La Guardia hated Germany. They just don’t accept the creed of Riyadh or Teheran.