Time Magazine has come out with a headline claiming that race-class war is coming to America and Ferguson is the first stirrings of it.  At the same time we are being fed statistics showing that how “USA Today reported that on average there were 96 cases of a white police officer killing a black person each year between 2006 and 2012, based on justifiable homicides reported to the FBI by local police.”  The story is open-shut, the people of Ferguson, who are mostly African-American, are victims of systematic racism and abuse at the hands of a 90% white police department and this is a symbol of America.  Black people are kept poor by “the system.”

At the same time we are supposed to believe that therefore all “poor” people have something in common with the rioters and looters in Ferguson.  But behind the simplistic narrative is a more nuanced one.  In Dellwood near Ferguson rioters looted a small shop. Supposedly the “victims” of racism are these gangs of men looting.  But when media went out to interview the owner of the shop, they found a minority immigrant owner named Muntaz Lilani.  Mr. Lilani isn’t a big capitalist on Wall Street, he doesn’t have ‘white privilege’; but he isn’t the face many in the media want to see, because he doesn’t fit the nice “black-white” divisions everyone wants to put Ferguson into.  He works for a living.  And for that he was targeted by mobs who sought to destroy his livelihood.  People can critique the police all the want for excessive force or how they control riots, but people like Mr. Lilani should be supported by society, not scorned.  And the rioters should not be made into romantic heroes of a “class war.”

A gang of looters, the “victimized poor” broke into a shop in Dellwood

And that goes to the heart of the real issue.  It isn’t just about class; it is also about culture. There is an attitude in some communities of “you owe me”, an attitude that when one is growing up one’s parents don’t work or are always between jobs, always trying to “get from the man what was taken.” One isn’t encouraged at age 15 to save money and get a job, but rather to “take.” And we saw that attitude in the Michael Brown video where he goes into a shop and takes “what’s his” and throws the elderly owner out of the way.

There are different cultures. There is the culture of the middle-aged owner of that shop, who probably worked from a young age; and the attitude of Michael Brown who stole cigars and pushed those who dared oppose him out of his way.

I saw that growing up in Maine, which is one of the poorer states in the union and is predominantly white. There are sub-cultures of people who never work who are always sitting around drinking and who are in and out of law enforcement “problems.” And there are people who are raised from a young age to work hard. 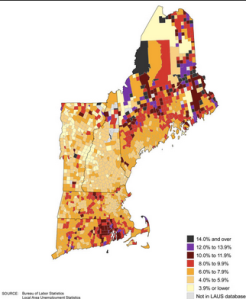 It isn’t about class, it is also about culture. I worked from when I was 13 washing dishes, waiting tables, serving ice cream. I can’t count the number of jobs like that I had. And I’ll bet if you survey the wonderful rioters in Ferguson you’ll find only a handful who have held jobs over their lives. And I’ll bet if you look at many other poor minority communities, like immigrants from Korea, Mexico, or India, or people like Mr. Lilani, you’ll find people who work hard.

What Time Magazine wants to tell us is we have to be in the same boat as some of the people of Ferguson. But many of us are not in their boat, their cause isn’t our cause. Too many of them see the answer to a police shooting as wanting to bash up stores and steal because “the gov’t owes me”. Fine. But they shouldn’t come whining about poverty.

Always only “white and black” in order to hide reality?

All of these little surveys separate poverty and unemployment into “white and black” but it isn’t “white and black”; it is “white, Hispanic, Asian, Indian and black.” And many groups and sub-cultures are doing ok; and they are not all poor. America may have class-success issues of social mobility, and it may be over-taxing the Middle Class, but none of those problems can be addressed until we stop pretending that we have to feel sorry for the non-working, perpetually unemployed “gimme or I take it” poor people. No sympathy for them. They are not a class. And the working poor are not in the same class with them.

The problem in America is people won’t ever be honest about race, class, unemployment and culture. They won’t admit the problems are often the local culture and the state can’t change culture. You could give the rioters in Ferguson $10 million dollars each…it won’t solve the systematic cultural issues.  All of the police in Ferguson could be African-American, as they increasingly are in many large cities. But that doesn’t change the culture of the local people, and unfortunately some of these sub-cultures of blacks, whites and others is harming their economic success far more than racism or class. And no one wants to admit that.