By SETH J. FRANTZMAN originally published in Frontlines at The Jerusalem Post

“If the rights of the Palestinians are violated, there cannot be peace,” says Prof. Dr. Yasin Aktay, the Justice and Development Party (AKP) vice chairman in charge of foreign affairs. “Everyday, there are [Israeli] settlements built that are a violation of honor and existence. The Palestinians object but they have no weapons; Israel has the weapons, and Israel bombs and kills thousands.”

An hour-and-a-half into an exclusive interview Aktay held with The Jerusalem Post, the veteran politician and academic is not holding back. “Israel should respect the Palestinian rights to exist in the region and their rights to live in their land. If Israel keeps opening settlement areas, they cannot receive respect.” His comments come on the back of Turkish Foreign Minister Mevlut Cavusoglu’s comments on December 18 saying a Palestinian state should be established as soon as possible. 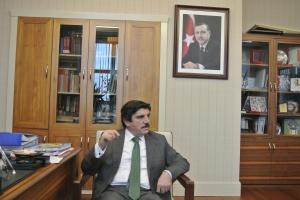 Turkey’s ruling party has been riding a wave of success in recent years, and, despite anti-government protests, has set its sites on gaining a two-thirds majority in parliament in the June 2015 elections. Since January 2009, when then-prime minister and now-President Recep Tayyip Erdogan upbraided then-president Shimon Peres in Davos over Operation Cast Lead, Ankara- Jerusalem relations have been spiraling downward. The 2010 Israeli commando raid on the Gaza “freedom flotilla” and its flagship Mavi Marmara resulted in the deaths of eight Turkish citizens, and worsened relations. Turkey withdrew its ambassador and expelled Israel’s ambassador in February 2011.

That the AKP is open to a sit-down with this newspaper to articulate its policies seems in itself a sign that it knows Israel sees the Turkish position as extreme, and that it wants to make its views known. The meeting takes place on the eighth floor of the party’s imposing and modern headquarters in Ankara. The massive 1,000-room new Presidential Palace looms in the distance, where Erdogan is meeting with the Qatari emir on December 19.

Aktay, a sociologist by training who once lectured at the University of Maine, is a reminder that Turkey’s foreign policy has a highly academic pedigree; its last foreign minister Ahmet Davutoglu (now prime minister) was an academic before assuming his role. That Davutoglu went from the Foreign Ministry to the Prime Minister’s Office shows the primacy of foreign affairs in the government’s outlook. “We have a policy of bringing peace to the region, not just among Israel and Palestine; we tried to follow a policy of zero problems but that doesn’t mean [our] neighbors let this happen,” explain Aktay. The irony of the zero-problems policy is that almost from its inception, Turkey has been plagued with problems associated with the Arab Spring; watching its neighbor Syria fall apart; and having president Mohamed Morsi, who Erdogan supported, overthrown in Egypt.

Nevertheless, Aktay reiterates that Turkey sees itself as playing the role of mediator in the region. “Peace is a concept for bringing together all the parties, and we think neighbors should be in zero problems. We tried to play the role of mediator between conflicting parties in Syria, Iraq, Palestine, Israel and within Palestine. For example, between Palestinian parties, we insisted they [Hamas/Fatah] be united and develop and have one position; agree on democracy and respect each other. That will help create a good relationship and [the] solution process. “Turkey tried to set Israel and Palestine [on the right course]; it also [worked] with Syria, and on the Syria-Israel issue.”

Aktay thinks Israel can learn from Turkey’s Kurdish policy. “The AKP government moved to recognize the right of the Kurds to speak in Kurdish, their mother tongue, and we recognized the identity of the Kurds. We can happily say that the problem with the Kurdish people was solved.” 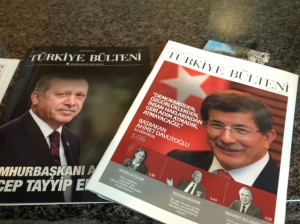 He speaks in carefully veiled terminology. “Some are seduced to think they can eliminate somebody, and dominate and hegemonize everything; that is not good for anyone.” The implication is that Israel and its ally, the US, have tried to impose their will on others in the region. Similarly, Aktay imbues certain words with great meaning.

For him it is “respect,” a word he uses repeatedly. “We respect the right of the Israeli people to live there. But if we were to build a new future, a more secure future, not just for the Arabs but also a more secure future for the Jews, that requires respect, from Palestinians to Israel and vice versa. But the superior side is Israel because it [has the] power, it has the guarantee of the superpowers in the world.” The major sticking point in Israeli-Turkish relations continues to be the flotilla incident. “We had three conditions: One was to apologize, which took place; the other was compensation of the victims, which also was about to be done but then the last attack on Gaza took place [Operation Preventative Edge]; the last condition was the siege on Gaza be abolished. This is important because it was the reason for the Mavi Marmara trouble.”

Aktay has a dim view of Prime Minister Benjamin Netanyahu, who he views as having launched the summer war with Hamas to get votes. “Democracy can create new chances, new possibilities and new opportunities to open new pages; there is some chance the [upcoming Israeli] elections have the potential to refresh the relationships and make the actors open new pages.” Turkey has been open in its support of Hamas; Erdogan has hosted both Ismael Haniyeh and Khaled Mashaal. Ankara also views the government of Egyptian President Abdel Fattah al-Sisi extremely negatively. “Egypt is part of the problem, not part of the solution. It is cutting its relationship with Hamas, and puts pressure on Hamas. Hamas views Egypt as on the side of Israel, it is not on the side of the Egyptian people. You cannot keep talking to Egypt only; you must also talk to Hamas or there will be no sustainable solution.” Aktay is clear that “we support Hamas and do not believe it is a terrorist organization.” This is particularly unpalatable to Jerusalem, but Ankara is open about this fact. However, he adds the caveat that “we don’t encourage Hamas or any organization to do any violent activity in the region.”

His view is that Israel’s best interests will be served by ending its settlement policy and respecting Hamas in peace negotiations, since he argues many Palestinians support Hamas. He argues that Israel can learn from the biblical story of David and Goliath; describing Israel as behaving like a Goliath and saying its military might will not succeed in the end. “We recommend that the Israeli people have empathy for the Palestinians and talk about the reason the Palestinians are living like this.” In language that has become a talking point in some circles, he argues Palestinians should not “pay the price of European sins.” Noting that Turkey condemned the Holocaust, “what Israel is now doing is almost the same; of course not the same, but similar,” opining that Gaza is like an “open concentration camp.”

A poster of Ahmet Davutoğlu in Ankara, as the AKP prepares for a party congress (Seth J. Frantzman)

Turkish policy-makers under Erdogan have a dim view of Israel, and have been influenced by critics of Israeli actions; the talking points about David and Goliath and Gaza being a concentration camp are not unique to Turkey. The AKP has had an affinity for Islamist- style movements among Palestinians and Egyptians, believing Hamas and the Muslim Brotherhood have some kinship with its own worldview. Erdogan’s frequent pronouncements against Israel, comparing the country’s actions to Nazism as recently as during this summer’s war, hide a deeper issue: The Turkish leader and his foreign policy team have a deeply felt emotional interest in the Palestinian issue. Several times during the interview with Aktay, he stresses the 2,200 Palestinian dead in the Gaza war, and the 500 children he says Israel had killed. “You killed children and justify it as an act of self-defense… it is a kind of massacre. You take your revenge by killing innocents, 500 children.”

This is against the backdrop in which, as mentioned above, Operation Protective Edge torpedoed an agreement Israel was on the verge of making regarding the Mavi Marmara. The Turkish support for Hamas makes it difficult for Israel to consider how the country can play a positive role, or how relations can be thawed. But Turkey and Israel share interests in trade and energy issues in the Mediterranean; there are common interests in ending the chaos in Syria; both look askance at Russian and Iranian influence.

There is likely much to be gained by Israel continuing to see Turkey as an important actor in the region, and Ankara has been open about its views. For years, Erdogan has wanted to show he can be a peacemaker, beginning with attempts in 2008 to broker a deal between Jerusalem and Damascus. Indeed, unlike much of the region, Turkey is a stable, economically robust country, and its current ruling party will likely be in power for years to come.

2 responses to “Insight into Turkish-Israel relations”