(Written for The Jerusalem Post, hence the concentration in parts on Israeli tourism)

Mustafa Kemal Ataturk is everywhere. A post display in Istanbul throughout the city boasts photos of the founder of modern Turkey. Here he is speaking to people. There he is thinking. In one photo with a small cup of coffee; in another he dons a military uniform sometime after the Great War. It is a reminder how much this one man, born in what is now Thessaloniki in Greece in 1881 and dying in Istanbul in 1938, shaped the country we see today. This is a deeply secular and modern country that views itself as a major power; something on display in Istanbul.

In recent years Turkey has become a major travel destination, with some 30 million visitors a year, contributing $25 billion to the economy, a sector accounting for almost one of 10 jobs in a country of 75 million people. But that is not without its struggles. 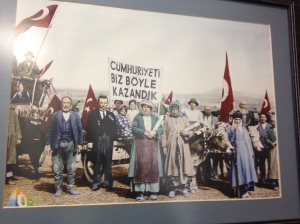 There is a lot of nostalgia for Turkey’s past on display (Seth J. Frantzman)

The economic troubles in Europe has seen a 6 percent decline in tourism and when it comes to Israel, the political impasse after the Mavi Marmara affair saw a 90% decline. In 2014 some 95,000 Israelis had visited the country by the outbreak of this summer’s Gaza war; at which point a massive round of cancellations at choice tourist spots, like Antalya, was reported due to tensions (only 2,600 visited the country in June 2014 versus 27,000 in 2008 according to reports).

With the conflict in Syria and the massacres by Islamic State gaining attention, there were fears of spillover into Turkey. The security issue is clearly present. At a Marriott in Ankara men checked cars for bombs with mirrors. Some large hotels in the capital and Istanbul have scanners at the entrance. Those entering the airport have to pass through security just to get to the ticket counters.

But Turkey remains an inviting destination, perhaps precisely because less people are going. A quick check of travel websites such as Skyscanner and Kayak reveals prices from $100-$200 for round-trip tickets to Istanbul. There are two airports serving Istanbul; Sabiha Gökçen International Airport and Atatürk International Airport. We flew Pegasus Airlines, a discount carrier of Turkish Airlines, to Sabiha. That puts you down about 30 km. outside the city and a 40 minute drive. A taxi costs 80 Turkish liras ($40) whereas the Havatas airport shuttle costs 13 liras. From Atatürk airport, which is closer to the center and located on the European side of the Bosphorus Strait, take the metro (red line) or pay 40 liras for a cab. You can take the metro downtown to within walking distance of the famous Blue Mosque at Sultanahmet.

Istanbul is a massive city with some 17 million inhabitants. The great city of the Byzantine Empire, it lays astride the Bosporus, the great waterway connecting the Black Sea and the Mediterranean. The Byzantine city was conquered by the Turks in 1453 and its massive church, Hagia Sophia, became a mosque. Now it is a museum. Nearby is the famous Blue Mosque completed in 1616. You’ll notice in any visit to Turkey that most mosques resemble the architecture of these two, along with the tall spindly minarets.

We opted to spend time in Ortaköy, about 9 km. up the Bosphorus. The suffix “köy” in Turkish indicates a “village” but this place is still a part of central Istanbul. The Etz Ahayim Synagogue is located here, as are numerous churches; showing the diversity of the city. Even though Turkey is primarily Muslim there are still small populations of Jews (20,000) and Christians. The beautiful Ortaköy Mosque that glows gold at night as it is basked in lights, and rests below the “first bridge” that connects Asian and European Turkey, is a true marvel and a must see. Men stand along the banks of waterway fishing and nearby people encourage tourists to eat at fish restaurants or sample baked potatoes. A man heats-up coals for smoking with a nargila.

Turkish nightlife in Istanbul seems swank and awesome. Located along the sea; looking out on the giant ships and ferries, some of the 1,300 who ply the waterway a day, dozens of clubs cater to the elite clientele of this “east meets west” city. Check out Sortie or Reina, both in Ortaköy, both overlooking the massive bridge with sparkling lights.

Nightlife is a must in Istanbul

Or try dining at Mavi Balik, where some friends of ours from Channel A9 and the Harun Yahya organization hosted us. A multilevel restaurant that caters many events; the spacious patio dining overlooks the water and is a tad cold at night, despite the space heaters. A man in a suit shows off the night’s fresh fish, resting on ice. An army of waiters bearing meze and other goodies buzz around the table during dining.

A quick 40-minute flight to Ankara presents a contrast with stylish and cosmopolitan Istanbul. Chosen as the capital in 1923, it had only 30,000 residents and was a large town. Today more than 5 million live in this massive sprawling city whose broad avenues and Brutalist 1950s architecture make it seem dreary, businesslike and statist. Sites to see include the parliament building, a drive down the avenues near the various armed services buildings and an old palace. Recently the government has invested in a massive Cumhurbaskanligi Sarayi or Presidential Palace, a 10-minute drive from the parliament, it dominates the skyline with more than 1,000 rooms.

A must see, in fact one of the few real tourist sites in Ankara, is the beautiful and imposing mausoleum of the country’s founder and first president Mustafa Kemal Atatürk. Built in 1945, visitors walk down a long cobblestoned avenue perched atop a hill overlooking the city. A expansive plaza cordoned by stone porticoes and colonnades funnels visitors to the mausoleum complex. A free museum is located underneath and visitors can learn about the life of Atatürk; his role in the First World War, and in bringing about women’s rights reforms and secularism. It is a reminder that Atatürk was responsible for setting Turkey on a different path than its neighbors. While Eastern Europe was dominated by Nazism and then Communism, Turkey became modern and secular. 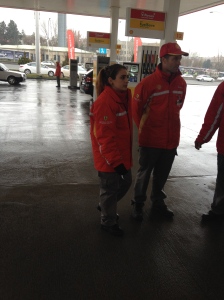 A woman works at a gas station; Turkish women are empowered and work in all walks of life

When the Arabic countries became more conservative and never freed themselves of the shackles of tradition; Turkey built cities that rival those in the West. It is a country of contrasts, but one where women work security, pump gas and are professors. Unlike other parts of the Middle East where people are being slaughtered for being minorities; in Turkey when we were there, it had Christmas trees on display everywhere and “Jingle Bells” was playing in the airport. This is a country secure with itself and proud of its heritage. Although it faces many internal disputes, such as conflicts between its ruling party and some in the press and judiciary, and accusations that its president is too much of a strongman; for tourists this is a choice destination