There is a lot of fury at Netanyahu.  Newspapers across Europe are enraged at the Israeli leader.  Opeds are pouring in throughout the world.  The Metro, a British tabloid encapsulated the anger on February 16 with the headline on its front page, “Fury as Israeli PM tell Jews to flee Europe.”  European leaders were enraged, “European leaders have reacted with anger at Israel’s Prime Minister Benjamin Netanyahu extraordinary plea for Jews to leave Europe to escape the rising tide of antisemitic terror attacks.”

What’s this thing about terror attacks?

It seems there have been two similar terror attacks in recent months.  But the fury was directed at Netanyahu.  NGO websites proudly pasted about the fury.  Rebecca Perring at The Express also wrote about the fury.  “Benjamin Netanyahu made his plea for Europe’s Jewish population to emigrate to Israel just hours after fatal shootings in Danish capital Copenhagen, where a freedom of speech event and a synagogue were both targeted.”  Denmark’s Chief Rabbi Jair Melchior was “disappointed” in the Israeli leader.  France’s Prime Minister, who has been impassioned in his defense of Jews in his country after the January murder of four at a kosher market, was also unhappy, “I regret Benjamin Netanyahu’s remarks. Being in the middle of an election campaign doesn’t mean you authorise yourself to make just any type of statement.”  The Daily Mail, which owns Metro, pasted the article as did other sites.  +972 wrote about it, as did Haaretz. 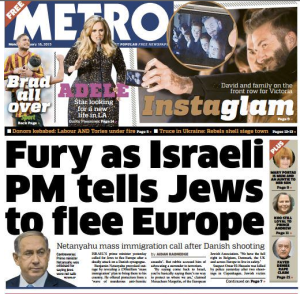 The cover of Metro

Netanyahu also became the main talk over at the UK’s Independent.  “Netanyahu is guilty of grave errors of presumption. He is wrong to advocate flight in response to terror; wrong again if he thinks all Jews define themselves in relation to his nation; and thrice wrong to disregard the enormous pride integrated, assimilated, successful Jewish diasporas have in their country of birth,” wrote Richard Ferrer.

Soon the real narrative of the Copenhagen attack on the Great synagogue became about Netanyahu.  The Wall Street Journal discussed “rejection” of Netanyahu’s outcry.  “We are a little confused by this call, which is basically like a call to surrender to terror,” said Arie Zuckerman, senior executive at the European Jewish Congress.  The Financial Times editorialized against Netanyahu, although not against anti-semitic attacks in Europe.  “Mr Netanyahu’s comments also disrespect the way in which many European societies have successfully sought to build relations with Jewish communities over recent years.”

One of the most interesting comments on social media was the claim that “as offended as I am by anti-semitism, I am equally outraged by Netanyahu’s calls to immigrate.”  Numerous iterations of that appeared online.  So why did the European and other press give the Netanyahu call such attention?  Why did it become the main story within a day after the attack on the synagogue?  Why did those like Piers Morgan write with such outrage against Netanyahu, but not devote a column to the anti-semitic terror attack? “Netanyahu’s reaction to the latest appalling terror attacks in Denmark, which echoed sentiments he expressed after the Charlie Hebdo outrage in Paris, is a disgrace: cowardly, self-serving, crassly insensitive and overtly political,” Morgan wrote. 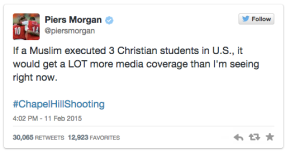 Morgan was outraged over Chapel Hill

The Netanyahu comment got such coverage precisely because it was more convenient to talk about Netanyahu than talk about anti-semitism or what the response to it should be.  It is reasonable that Jewish newspapers, like the Jewish Week, will debate the issue of immigration to Israel.  As such Zvi Barel’s column at Haaretz was appropriate.  Since the dawn of Zionism there has been a debate about Zionist or Israeli interference in Jewish communities and aliyah to Israel.   In 1919 the discussions over the Mandate for Palestine noted, “it being clearly understood that nothing shall be done which may prejudice the civil and religious rights of existing non-Jewish communities in Palestine or the rights and political status enjoyed by Jews in any other country.”

But the way in which a shooting attack is turned into an attack on Netanyahu by newspapers is interesting because it shows how Israel becomes the distraction.  After the Paris attacks a BBC reporter asked a woman about Israel’s attacks on Palestinians.  After Copenhagen a radio show asked the Israeli ambassador whether Jews cause anti-semitism.

Compare it to other recent racist attacks.  Within hours of the Chapel Hill murder of three Muslims there were numerous article about how it was a terrorist hate crime.  Sabbiyah Pervez at The Independent was angry over how the media was ignoring the attacks.  When Turkey’s President Erdogan blamed America and Obama for not speaking up about the attacks, the media didn’t shift all its attention to him.  No one said that Erdogan was wrong, that in fact Muslims are safe in America.  Why is that?  Unlike with the anti-semitic attacks in Europe where the BBC called them “apparent anti-semitism” and others said they were “perceived” as anti-semitic, many people on social media had no doubt about Chapel Hill.

Why was it “apparently antisemitic”

When a black man was prevented from boarding a subway in Paris by fans of the UK football club Chelsea there was a massive outrage.  This was big news in the UK, with condemnations of racism and people seeking to prosecute and identify the fans.  Yet, the same BBC did a report on a Jewish man walking around Paris in a kippah and didn’t take the verbal attacks as seriously against him as they did the Chelsea fans’ racism.  “Although a bodyguard was trailing Klein and his secret cameraman, the abuse didn’t escalate beyond the verbal,” the BBC wrote.  Wait a sec. 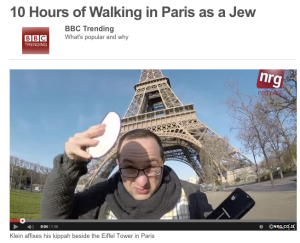 A Jewish man needs a bodyguard just to wear a kippah and the press writes “didn’t escalate beyond the verbal.” But with the victim of the football fans, there was no comment about “not beyond the verbal.”  Why the difference?  Why is hatred of Jews in Europe acceptable, but similar verbal assaults on other minorities is not acceptable?  Why can the Turkish president condemn Islamophobia but Netanyahu receives “fury” for speaking out.

The fact is that Europe is afraid to face the festering anti-semitism.  No one wants to discuss how a future for Jews in Europe will look.  No one wants to ask why Jews need armed guards at kosher markets, why they need armed guards at schools and at their synagogues.  No one wants to ask why even though Jews are less than .5% of Europe they are 40% of victims of terror in recent years on the continent.  Why are hundreds of Jewish graves desecrated?  Why is the natural inclination of terrorists to shoot up free speech events and then a synagogue? 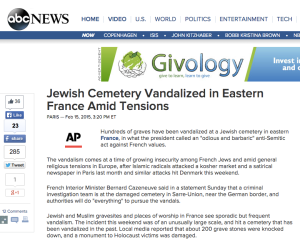 Tough questions.  But its easier to have Netanyahu.  If Netanyahu didn’t exist the media would invent him in order to talk about Israel, rather than Europe.  The truth is that irrespective of the existence of Israel, Jews deserve equal rights in Europe; and they should be allowed to pray and go to school and go to a store without armed guards and walls of security.

One response to “Using Netanyahu to distract from anti-semitism, the new tactic”