So the New York Times has finally written up the story about how Haredi (ultra-Orthodox Jewish men) are accused of causing trouble on airplanes by not wanting to sit next to members of the opposite sex due to religious reasons.

That’s all well and good, but seems like a real waste.  If you’re going to try to get the seat you want there are many other things to look for. It isn’t easy to rank what is the most important quality of a seat, but lets try.

Hunting for the elusive “golden seat” in economy

First of all it depends on the length of the flight.  For a short flight on a smaller airplane like an Embraer 195 it may not matter. And in some cases there is little choice.  But even in a smaller plane on a short journey seats next to the front should be prized. Some airlines have begun charging for economy plus, a way to squeeze whatever pennies they can from you.  Several websites also claim to help you find the best seats.

Let’s remember a few rules.  You want to be close to the front of the airplane, because it’s faster to get off and on the airplane, but you don’t want to be caught in the so-called “sewer seat” next to the bathroom.  Another thing to recall is you want a buffer-zone between the bathroom and yourself on a medium or long flight because of the pileup of people waiting for the bathroom.  You don’t want to have to sit next to the “line” of people who will often be trying to get past one another.

However just beyond the sewer-buffer zone is a sweat spot because you may end up being closer to where the “bar” is on the airplane, the so-called “fun zone” where you get easily get the attention of the stewardesses to get free drinks on an international flight.

Aisle or window?  Windows are always fun because you can see out of the airplane.  That’s nice.  Also you can use them to curl up and sleep.  But on a longer flight or a larger flight you may end up being smushed into the window like a pillow being crushed by a fat man.  Think about it.  Do you really want to be all crushed up against the window with two fatties next to you.  When you choose a seat you must think of the worst case scenario of what kind of “traveling companions” you will have.  So is the window the best choice?

An aisle seat allows you the space to exercise.  You can get up and escape to the bathroom.  You can find some water and drinks.

Whatever you do, the “sandwich” seat in a three seat arrangement is the worst option.

Another bad option is any plane that has an internal row, this row is for the bad prisoners.  You don’t want to be there.  It’s the college dropout row, the place for the people who didn’t bother to choose their seats online, the latecomers, the kind of people who got picked on in high school.  It’s the reject row.

The only time the internal row is a good option is when there are three or four seats open in it and you can lay down.  But here’s the hint, you can always go and colonize a row like that once the plane is in the air, why would you gamble and end up in exile there. 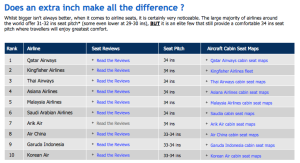 Some airlines still offer seats that are wider or have more “pitch” which is the fancy way of saying “spacing.”  Since you may be stuck in the seat for a while, obviously those airlines are the winners.  But since the chances of finding those airlines is relatively rare and it is only some flights on some routes, one probably won’t be in luck.  Nevertheless the theory is that most Asian and Middle Eastern Airlines (Singapore, Emirates, etc) have wider seats in economy and more leg room.  Western airlines are stingy and American ones tend to be very bad.

Beware of the foreboding “seats that don’t go back.”  In some airlines there are bermuda triangles of comfort where a seat may not recline.  That’s a problem.  It is also an added benefit of the “bulkhead”; wherein no one will recline into your lap.  The so-called “seat defender” which was invented several years ago, has been causing conflict on airlines, so you can’t bring that along.