The new Nutella shop on Zahra street in downtown Ramallah was humming with business on Wednesday.
High school students Nur and her friend Sawsan had come into the city from the town of Katanna for memorial ceremonies marking the anniversary of Palestinian leader Yasser Arafat’s death 11 years ago, but they seemed more interested in consuming large amounts of creamy Nutella atop fresh warm crepes than in discussing politics. 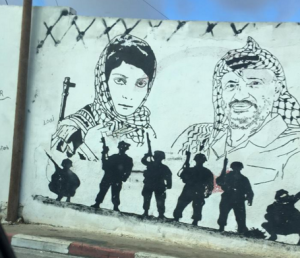 “Yes, we’re having an intifada, but it’s not so bad here. It’s worse in Nablus or Bethlehem. It’s fun to come to Ramallah,” said Nur.

Going to Ramallah last week we took the usual route through Qalandiah. It was quiet, with the general mild traffic chaos.  After driving past the Movenpick and the Lutheran church and the Mukata, my friend wanted from KFC, so we stopped.  Inside the KFC, which is a two story square building, and which has a Pizza Hut adjoining it, we were greeted with a complex menu.  Prices were reasonable, around 64 shekels for two meals, which included a sandwich, some thighs and chicken fingers.  The food was good, but that’s probably because we were hungry.

Down by Manara square many youth with Palestinian flags had gathered and various vehicles with Fatah flags were making the rounds.  Agents from the Preventive Security Forces were around as well.  It turned out it was the anniversary of Arafat’s death.  Teens had come in from the area to participate.  Fatah had also called for protests at the DCO and Qalandieh for 2pm.  The center of town was humming.  Men in traditional outfits served tea.  A newspaper stand was selling papers, including Al-Ahram in English.  They had the International New York Times, but the Haaretz insert that is sold with it had been removed from them.

Over by Manara square a large banner showed Arafat with PA President Mahmoud Abbas, still trying to show that Arafat’s “living legacy” was worth supporting, in a Palestinian society that is torn between the low level “stabbing intifada” and the relative security of places like Ramallah.

At the new Nutella shop on Zahra street the young manager was making crepes.  A number of young women were there.  They said the life in Ramallah was pleasing.  One described how she had grown up in Wisconsin and returned to Palestine with her parents.  Evidently they thought Palestine was better than the state known mostly for cheese in the US.  Back in the streets, with the controlled chaos and hum of life, we walked back to the car that we had parked behind the KFC. On the way we passed a bookshop with a copy of Mein Kampf, later in the day we would see swastikas spraypainted near the DCO, a reminder of the low level anti-semitism that is passed off as anti-Zionism.  I thought it would be easy to leave through the DCO.  Ramallah only has a few exits, one by Kalanieh, the other at Adam, then at the DCO, the “Al-Jib” route and the Bir Zeit road.  Only registered cars can pass at Al-Jib, but DCO lets journalists and internationals through usually.  The problem is that it is a site of frequent clashes these days.  When we arrived there, dozens of media and hundreds of youth were stoning Israeli army jeeps.  There was no going through.  It was mostly kids and teens.  Some played on swings nearby.  Dozens of ambulances awaited the wounded and claimed 50 had been harmed already.

To finally leave Ramallah we took the most circuitous road via Jelazun, Ein Sinya, Yabrud, Silwad and then via Taybeh to get back.  A reminder of the separated road networks in the West Bank and daily difficulties Palestinians face just to travel about.

All in all it was a good day.  Nothing changes really in Ramallah, it gets slightly more modern, but politics remain the same, the same dissonance of youth growing up throwing rocks, the deep hatred for Israel, but the unwillingness to have a mass struggle, because the desire for limited normalcy of everyday life is higher.

A remind of the seething anger and racism that has infected society.