SInce ISIS burst on the scene in 2014, one of the things analysts have said made it different than many terrorists organizations was its interest in holding territory.  It wasn’t like Al-Qaeda, because it was intent on creating a zone of control.  In that sense it shared qualities with the Taliban, Al-Shabab or Boko Haram.

ISIS was initially very successful in its gambit to control Sunni areas in Iraq and Syria.  In Iraq cities turned on their Iraqi government administrators and declared themselves for this new Islamic State and its “caliphate”.  Thousands of European volunteers (1,200 from France, 800 from Germany, etc..) flocked via Turkey to join.  ISIS went from victory to victory and when it ran into trouble with the Iraqi Kurdish Peshmerga, the Shia militias and YPG in Syria, it began carrying out new evils.  It committed a genocide of the Yezidis, and instituted slavery, selling thousands of women.  It slaughtered and cleansed Christians and Shia.  It began making horrific videos, burning a Jordanian pilot and beheading foreigners.  When it ran out of minorities to kill, it kept making videos of murdering Sunnis who were too “moderate” for it; driving over them with tanks and drowning them.

There was always a terrorist element in ISIS in Iraq, portions of a leftover Sunni Jihadist terrorist element that had dated back to the Al-Qaeda fighters against the Americans after 2003.  Over the years various Sunni Jihadist groups in Iraq targeted Shia and Yezidis with bombings.  In 2007 attacks in Khataniya on Yezidis killed 500 people. In 2005 some 800 people had died in a stampede when Shia at a shrine heard rumors of a suicide bomber.  Baghdadi Shia became frequent targets of bombings, with the overall numbers killed ranging into the many thousands over the years, so many, the media stopped keeping count or even reporting them.

ISIS terror attacks coincided with its defeat on the battlefield.  The July bombings of Kobani Kurds was one example. The Ankara bombings that targeted a Kurdish rally was another. The message of these bombing was to scare Kurds in the runup to Turkish elections, and also after YPG victories against ISIS.

Then something began to shift.  After Russia began to involve itself in Syria’s war in October, a Russian airliner crashed in Sinai on October 31, killing 224.  The investigation has ruled out mechanical faults and the belief is that it was blown up.  An ISIS-affiliate in Sinai took credit. Then there were the November 3 bombings in Beirut, Lebanon that killed 43.  The France attacks on November 13 which killed more than 120, were almost certainly carried out by ISIS or inspired by them.  They come in the wake of ISIS losing ground at Sinjar where Kurds cut the highway to Mosul, and ISIS is being pushed back slowly in Syria and by Shia militias in Iraq. In short it may find that it being “contained” in Iraq and Syria (as Obama described it), means it will morph into a norm form of terror organization, rather than geographical-based “caliphate.” 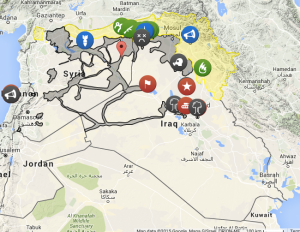 The France attacks have more in common with the Westgate attacks in 2013 in Kenya in which 67 were killed and the Mumbai attacks in 2008 in which 147 were killed. In those cases a series of terrorists went on a rampage in the heart of a city.  Mumbai, which was carried out by a Pakistani terror group, is a similar model.  It also has something in common with the London 2005 and Madrid multiple bombings in 2004.

One can also draw parallels with the numerous massacres carried out by Boko Haram, such as the 2,000 killed in January 2015, or the Kano attacks in 2014.  One can draw connections to the Beslan school massacre in 2004 and the Peshawar school massacre in 2014 in terms of the horrific death tolls (331 in Beslan and 145 in Peshawar) or the 2002 Bali bombings where 202 were killed and the stabbing attacks in China in 2014. It brings to mind the Moscow theatre siege in 2002 where 170 were killed.

So what is happening with ISIS?  If its reach extends to Paris, Sinai, Baghdad and Beirut, it has modeled itself on Al-Qaeda’s heyday, when it carried out attacks in Kenya (Embassy bombings 1998), Yemen, Afghanistan and elsewhere.  If ISIS loses more ground in Iraq, such as Mosul and Ramadi, will it shift its resources to mass murder abroad?  Will it become yet another in these series of terror organizations whose only currency is killing like the In Amenas oil refinery attacks in Algeria or the Tunisia beach massacre.

Map of attacks in Paris 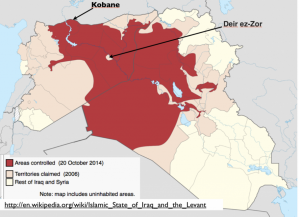 3 responses to “Is this the new face of ISIS: Sinai, Baghdad, Beirut, Paris?”