As fires raged across Israel last week and over the weekend, a media debate began which was unsurprising.  On one side were the security experts and analysts and the center and right, the populists, who claimed Israel was facing a “wave of fire” that was an “aishtifada” or “fire intifada.”  On the other side came the more left wing pundits who explained that it wasn’t true that there was incitement, there was little support for fires in Arabic social media and that “fires also affect the Palestinian population.”  The Palestinian Authority sent fire fighters to help combat the blazes.

Even as communities such as Nataf, Neve Shalom, Beit Meir, Halamish and 60,000 residents of Haifa were evacuated, many prevaricated about the causes. +972 claimed that politicians were “blaming the Arabs,” without investigating. It’s “negligence,” some said, or “climate change.” Jamal Zahalka wrote on Facebook that Israeli officials were accusing “the Arab minority of arson,” even before police investigations had taken place. “It is unfortunate when elected officials choose to enhance the division in the Israeli society and add fuel to the fire.” Haneen Zoabi, also from Balad, posted that the “land is our land,” and connected the fires to other injustices such as uprooting trees or disconnecting Palestinian farmers from their lands via the “racist wall,” Israel had built.

While it is true that the investigation of the cause of the fires is not complete, and no one knows if those detained for arson will be convicted, what is unmistakable is that there was a wave of support for the fires on social media. The most ubiquitous celebration of the fires could be found on Shehab News Agency’s Twitter page. The news group is often described as connected to the Hamas movement. On November 24 the twitter feed, which has 140,000 followers, claimed “60,000 settlers” had been evacuated from Haifa. Another tweet showed the “affects” on the “settlers in occupied Haifa,” while showing photos of Nataf. Cartoons showed Israeli Prime Minister Benjamin Netanyahu floating over a burning Israel. Shehab eventually published a meme with the hashtag “Israel is burning,” even though the organization usually speaks of the “Zionist entity.” 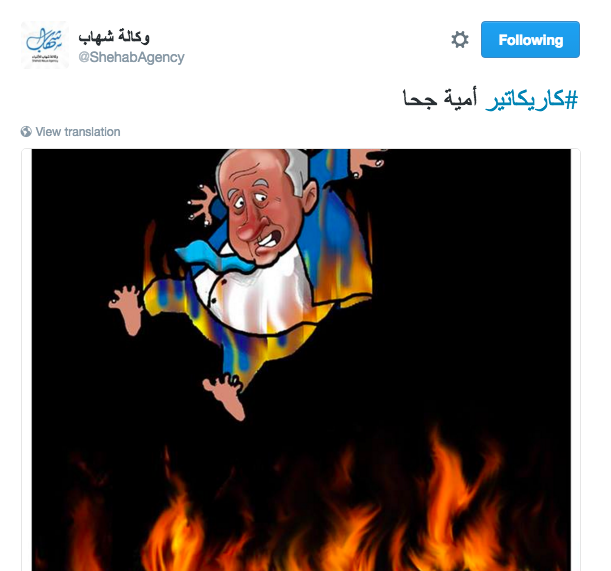 The hashtag in Arabic was. #إسرائيل_تحترق

The meaning was “Israel is burning.” A search of the hashtag reveals the depth of hatred and celebration.

Searching the hashtag itself reveals support for the fires throughout the Arabic speaking world and on Arabic media. One account named “@baz4peace” tweeted that “hell erupted in the Zionist colony…you lied about this land given and God doesn’t like liars.” The tweet was retweeted 116 times. An account with 83,000 followers tweeted about the fires in the Galilee in “occupied Palestine,” and another man tweeted a photo of Hitler, one finger raised to the heavens in an Islamist symbol, with the hashtag. “Red friday,” the tweet said, to mock “black friday” after Thanksgiving. Hitler made another appearance @latina1loca “it brings back some memories, die slow Jew, die slow.” A woman named “viva Fidel @murtadina” wondered whether she was being “insensitive” for “enjoying this” and then said she wasn’t, claiming Israelis celebrated bombing Gaza.

Taking advantage of the hashtag, some supporters of Shia militias tweeted it to highlight success in the operations against Mosul and ISIS.

Another line of reasoning for the fires were those who supported them claiming that the trees they were burning were “JNF trees” which had been planted atop ruined Palestinian villages. A writer with 93,000 followers tweeted several times about this. We also see that accounts such as @palinfoen wrote that “Zionists accuse Palestinians” of setting the 250 fires in “occupied Palestine.” Spongebob made an appearance, dancing in one meme. “A great start to my day,” wrote one woman. “You stole innocent people’s land, I hope you a destroying fire.” 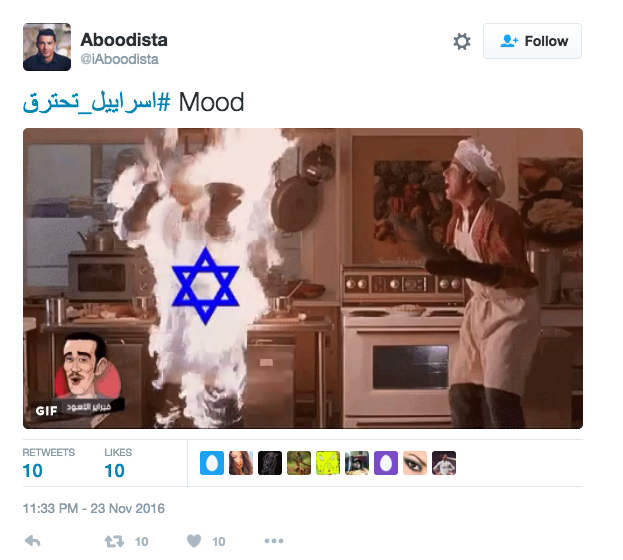 A man with a Star of David on fire (screenshot)

Moinuddin Nasrullah and others used the hashtag without elaborating but seeming to celebrate it. Most interesting, like others who claim they are involved in “peace,” these tweets did not seem so peaceful. Others, such as Sama Hannoun, noted that the fires could spread to “Palestinian territory.” According to one site the hashtag was one of the main trends worldwide on November 23. @ElBaladOfficial (not connected to Israel’s Balad party) helped make that happen by tweeting photos of the “Zionist entity,” battling fires on November 23. @SaudiNews50 with 7 million followers also tweeted about the “Zionists” fighting the fire. 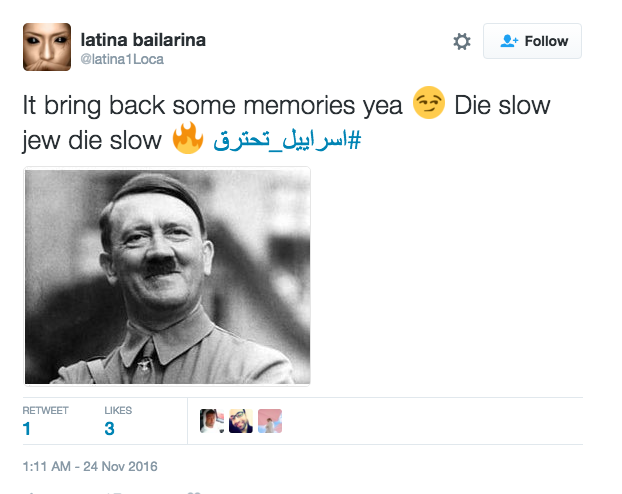 Some tweeted about Hitler (screenshot)

A more offensive tweet showed a man burning with a blue star of David posted on him. “I never seen in my life more beautiful than this scene,” wrote @Desertkhalid to 21,000 followers.  Others with thousands of followers agreed it was beautiful. “This is the small [sic] of hell waiting for you,” wrote @mooj_992. Many Saudis seemed particularly interested, one claiming it was the “wrath of God.” Tweeting “free Palestine,” a man celebrated “your children are crying.” It was because Israel sought to ban the call to prayer, some thought.

It’s hard to quantify how much support for the fires there was throughout the Arabic speaking world or out of all the tweets in Arabic.  It is obvious that the hashtag was trending and very few tweets opposed it. There were some in Iraq, Pakistan and elsewhere who tweeted that they stood with Israel or who expressed opposition to the hate-filled view.

Some said they stood with Israel (screenshot)

The themes expressed in the tweets are  of interest because they reveal different pathologies behind hatred of Israel.

Hell – Many tweets suggested that this was a form of God’s wrath or a kind of hell.  This is connected to a more religious-inspired zeal that hates Jews and Zionists together. It was more prevalent after the tweets that came from Saudi using the hashtag.

Hitler – A clear connection with anti-semitism can be seen in some of the Hitler meme.  It not only reveals the degree to which anything that happens to Israel is immediately connected to the Holocaust, but the irony with which those who openly support Hitler and Nazism, will also claim that Israel is involved in Nazi-like crimes.

Happiness – With little reservation, many expressed happiness at what was happening, hoping to see the country and its residents burn.

Occupation and settlers – Many tweets revealed that the term “settlers” is not reserved as it is in western media to those Israelis living in the West Bank, but that the whole of Israel, including Haifa, is considered “settlers” and “occupied.”

Revenge for 1948 – Some memes picked up on the view that the burning of forests was a particular way to undermine “Zionism” because it struck at “JNF trees.” In this view the trees themselves supplant traditional Palestinian agriculture or villages and thus the trees are to blame and burning them is a way to take revenge for 1948.

The problem for the apologists for all this is their view that logic dictates that the fires also harm Arab communities in Israel is not a logic that many anti-Israel voices abroad care about.  There are few if any tweets in Arabic worrying about Palestinian residents of Israel, or worrying about Arab communities.  Few, if any, tweets cared that Neveh Shalom is a coexistence community where Arabs and Jews live together.  The reality that many must face is that on social media, which reflects the real views of many people, unfiltered by media, many have a visceral hatred for Israel, for every person living in Israel.  They don’t distinguish between “settlers” in Halamish (where fires burned 35 homes) and “settlers” in Haifa.  The nuances that many Israeli voices on the left want people to see are simply not there.  There is no major pushback against tweets celebrating the burning of Haifa (even though Haifa didn’t burn).

There is a reality in which support for the fires, anti-semitism, religious inspired Islamist zeal, combine, unchallenged on social media. The theory that “if only they will see that Arabs are affected also then it will change,” is mistaken. Because it doesn’t confront the visceral hatred for Jews and pleasure that many take on social media in imagining harm done to Israelis. Without confronting that incitement and admitting that many believe every inch of Israel is “occupied” and everyone is a “settler,” one is putting on blinders to the reality.

One response to “REVEALED: Arabic social media support for fires and arson in Israel”