Why did Iraqi forces shoot protesters? A look at the background and details from October 1 to 5

A version of this article appeared at The Jerusalem Post, this one includes hyperlinks to the sources and may be expanded as the situation develops

A variety of videos coming out of Baghdad show security forces shooting at protesters. Over the last twenty-four hours, as Friday turned to  Saturday, the reports of snipers gunning down activists has grown. The elephant in the room cannot be ignored: Someone in Iraq’s government told a section of  the security forces to use live-fire to kill protesters. It wasn’t a mistake, it wasn’t because police were outnumbered, and it wasn’t isolated incidents.

Why would Iraqi forces shoot the protesters from the same cities and southern provinces that many of the security forces or Popular Mobilization Units are drawn from? The question is worth asking because there have been various rumors and claims about the protests in Iraq that have posited that those doing the killing and using the most  heavy-handed measures are Iranian-linked groups. This creates an easy narrative of “Iran suppressing protests in Iraq,” as part of the larger Iranian goal to control Iraq for its own purposes.

To support the narrative of Iran’s role there have been stories about “Farsi speakers among the security forces” and “units changing uniforms” before attacking protesters. There are stories about plain-clothes officers among the security forces which leads to claims those in plain clothes are outsiders. In this narrative, spread in Arabic on social media, an “Iranian Revolutionary Guard Brigade” was permitted to enter Iraq by Fatah Alliance leader Hadi al-Amiri. Evidence? Some people tweeting about it. Until October 5 more concrete evidence was not available.

The claim of foreign interference goes both ways. Others have pointed out that a concerted social media effort has been made to fuel protests and some of the accounts are located abroad. Lastly voices in pro-Iranian media have portrayed the protests as directed by foreign powers.

None of these stories present a full picture of what happened. Like the proverbial elephant, they all only capture one part of what happened. From the first moments of the protest the security forces that were sent used heavy-handed tactics. Video showed men in camouflage uniforms, heavily armed, involved in clashes, as well as other police-style units in darker uniforms. The darker uniforms can be seen at this tweet, for instance.

Security forces firing live rounds at peaceful, mostly young, and unarmed protesters. This is a side street near Tayyaran square. pic.twitter.com/siCeIr5zcv

Warnings about protests had gone out in the early hours of October 1 and Baghdad was on alert. There appeared to be no attempt by any high-level politicians to try to head-off the expected demonstrations. The catalyst, ostensibly, was the sidelining of a popular counter-terrorism commander named Abdul Wahab al-Saadi. The last days of September saw anger online about the dismissed and some concerns among politicians, including Ammar Hakim. However, from the first moments of the protest in Baghdad’s Tahrir square, the activists said they were more angry about corruption and failed government services, as well as salaries. They said they wanted basic rights, like water, electricity and employment.

Yet the highest government officials, including the Prime Minister’s office and interior ministry appeared to show no interest in these demands on October 1. Violence resulted as anti-riot forces tried to clear Tahrir square and a bridge leading to it. They used vehicles with water cannons as well as forces on the ground. By night fall several were killed and hundreds wounded. Muqtada al-Sadr, Hakim and Parliament Speaker Mohamed al-Halbousi indicated that an investigation should be launched into the heavy-handed response. By nightfall the sounds of gunfire were common in Baghdad and protesters said that forces had fired into the crowds.

However the developing crisis on October 1 into the next morning lacked clarity in terms of which security forces were involved. Some of the police had empathy for the protesters but other anti-riot police used harsh methods, beginning with water cannons and then tear gas (See link) and live ammunition (listen to the sound of rifle fire). A narrative was formed blaming the Popular Mobilization Units or Hashd al-Shaabi, a group of mostly Shi’ite paramilitaries that are part of the security forces.  But there wasn’t any evidence put forward for this. Other demonstrators claimed a pro-Iranian militia called Saraya Khorosani had been brought into rough up the demonstrators.

A variety of different uniforms could be seen on October 1

Around the Green Zone, where the US embassy and other sensitive sites are located, the security forces did not take any chances. The Minister of the Interior Yasin Al-Yasiri reportedly visited Tahrir square on October 1 to observe the results of the clashes. Dozens of security forces had been injured, along with the 200 or more protesters.

Curfew in Baghdad starts 5 am with internet shut down.
It is getting serious out there.

The crisis continued on October 2 and it was at this point that officials took the decision to impose a curfew in Baghdad and shut down social media, effectively trying to strangle the spreading demonstrations by cutting off the internet. This didn’t work, the protests were already spreading across southern Iraq. In Baghdad, according to some accounts, the Federal Police and the army both sought to protect protesters and were not involved in shooting them. This compounds the question about who carried out most of the killings, which reached above sixty by Friday evening. Armored vehicles were also sent to Baghdad as a show of force. Later, video would show protesters outside Baghdad burning a Humvee and others throwing stones at Humvees driving through the city. Blame for the violence against protesters was pinned on various anti-riot units. One protester was quoted as saying that the army had not harmed the protesters, but blamed “masked paramilitary groups” and riot police.

With a curfew in place and the internet restricted the Ministry of Defense and National Security Council paid close attention to the developing situation. This was especially true after an explosion was heard in the Green Zone. The US-led Coalition issued a statement on October 3 saying that Coalition troops reserve the right to defend themselves. By the morning of October 3 a total of nineteen were reported killed. By nightfall Prime Minister Adel Abdul Mahdi made his first statement, claiming to be listening to the demonstrators and arguing that there was no magic solution to their demands. By the morning of October he would appear more lenient to listening to them, but it was still unclear who in his government had monitored and ordered the crackdown, including the use of snipers, against the demonstrators. There was clear video of forces shooting protests. 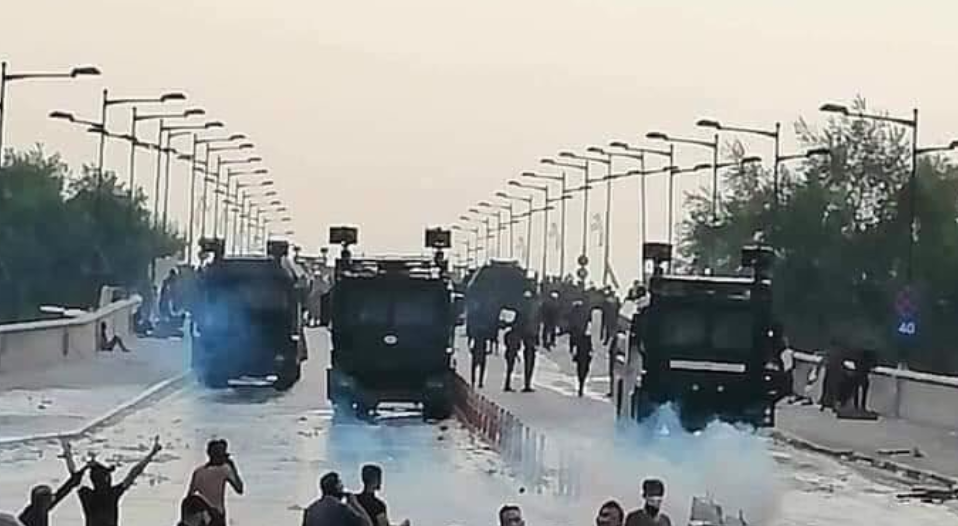 October 4 was the turning point. Protesters promised on the night of October 3 that they would take revenge for the killings. They said they would come out in force after prayers and ignore the curfew in place. Ayatollah Ali Sistani sought to relieve some of the pressure by sympathizing with the demonstrators. By the afternoon Muqtada al-Sadr had called for elections and former Prime Minister Haider al-Abadi had joined him.

By Saturday morning the curfew had been lifted and a tense calm spread to Baghdad. According to data released and tweeted by journalist Lawk Ghafuri, in the afternoon a total of 93 protesters had been killed and 3,978 protesters and security forces wounded. Almost 600 had been detained, with some already released. The data on the rising casualty count, from 60 on October 4 to around 100 by Saturday may not reflect the fact that forty more people were killed on the night of October 4 but rather full details coming in from hospitals. The numbers reported killed the first day were probably too low. Nevertheless it was clear from video posted overnight between October 4 and 5 that snipers were shooting the protesters. The overall picture of the protests then is that the first day was dominated by heavy-handed tactics by anti-riot forces. However something changed after the violence on the night of October 2, perhaps motivated by officials’ fears over protesters seeking to block the roads to the airport and areas around the Green Zone, more live fires and snipers were used. Demonstrators said that security forces had chased them into mosques and hospitals and many posted images of bullets (see post) littering the streets. Security forces even entered hospitals, including Sheikh Zayed and Zafaraniya in Baghdad, to detain people. Once again the story that it was militias or Shi’ite paramilitaries doing the monitoring of hospitals to detain wounded circulated in reports, including at The Washington Post.

Bullets were recovered from the streets

The impunity with which some units used live ammunition to suppress protests in Iraq, especially in the heart of Baghdad, leads to many questions about the functioning of Iraq’s government. Who gave the orders and which units were involved. Did they come from the interior ministry or from the Prime Minister’s office? The issue is important because there is evidence that many forces did not use live ammunition and even worked to prevent it. One expert who follows Iraq closely and goes by the Twitter name “Tom Cat” argued that the culprits might be less professional “Facility Protection Service” units. But this wouldn’t necessarily explain the use of snipers. The Joint Operations Command in Iraq said on October 4 they had no orders to use live-fire.

When the crisis ends in Iraq, regardless of whether there are early elections or a shakeup in the power structure, the question of who ordered the shooting of protesters will remain. There is a rising crescendo of voices asserting that protesters have a right to demonstrate and demanding to know why they were suppressed to brutally.