Part I: The excuse factory

In the wake of the Paris attacks, like with all terror attacks in the West, the excuse and explanation factory went to work.  “We have created a situation where some of these forces have grown…We’ve got a record, all of the Western governments, of interventions all across the whole piece and has peace got better as a result of it? Well I think you know the answer as well as I do to that,” said Labour leader Jeremy Corbyn in the UK.

The Stop the War Coalition claimed that the murder of 129 people in Paris was the fault of France.  “Paris reaped the whirlwind of Western Extremism,” claimed the NGO.

Mehdi Hassan claimed it was directly related to French policy. “If Isis did bring down the Russian airliner, then of course it would be madness to pretend it wasn’t linked to Putin’s military campaign on behalf of the dictator of Damascus. Yet it would be equally insane to pretend that the horror in Paris had nothing at all to do with France’s recent military interventions in the Middle East and west Africa,” he wrote.  He even quoted the reasons ISIS gave, namely that France was a “Crusader” state and a capital of “prostitution.”

The Swedish Foreign Minister tied the attacks to frustration, poverty, lack of hope and Palestinian suffering. ““Obviously, we have reason to be worried, not just in Sweden but across the world—because there are so many that are being radicalized. Here, once again, we are brought back to situations like the one in the Middle East, where not least, the Palestinians see that there is not a future. We must either accept a desperate situation or resort to violence,” Margot Wallström said. 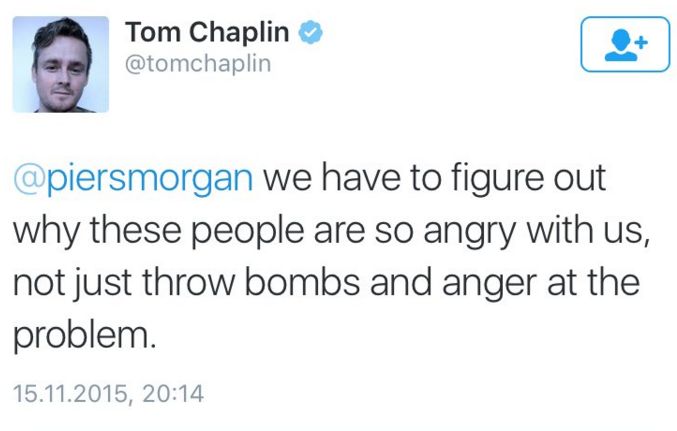 Another narrative is that the ISIS terror attacks are part of a conspiracy to spread “disunity” in Europe between Muslims and non-Muslims. “Central to their world view is the belief that communities cannot live together with Muslims, and every day their antennae will be tuned towards finding supporting evidence. The pictures from Germany of people welcoming migrants will have been particularly troubling to them. Cohesion, tolerance – it is not what they want to see. Why France? For many reasons perhaps, but I think they identified my country as a weak link in Europe – as a place where divisions could be sown easily. That’s why, when I am asked how we should respond, I say that we must act responsibly…My fear is that this reaction will make a bad situation worse,” claimed Nicolas Henin. An analyst told BBC the same thing, namely that the attacks stemmed from alienation, and that the “one thing terrorists fear is unity, they fear us having a policeless society, they want to provoke a response.”

On Twitter Tom Chaplin asked “we have to figure out why these people are so angry with us, not just throw bombs and anger at the problem.” 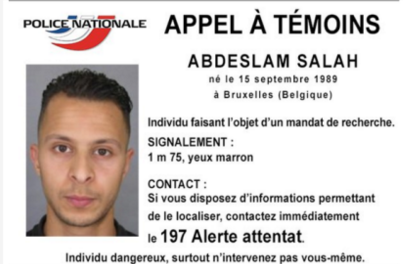 One fugitive on the run

The concept is that terrorism always has some explanation.  That often is feelings of lack of hope, frustration, alienation and poverty.  There is “anger” that the terrorists feel.  Then there are Western policies that provoke “blowback.”  Ironically the same terrorism is actually meant to “provoke” the West to attack the Middle East and thus “provoke” more terrorism, a kind of Catch-22.  The terrorism is also designed to cause a rift in society between Muslims and non-Muslims, thus causing the very “alienation” that causes terrorism, another catch-22.  The West is instead told to show “unity” and not have any police or security response, which of course means more terrorists can slip through, yet another catch-22.

Despite all evidence to the contrary, these “explanations” are inviting in the West.  Of course our “rich” society, caused the “poor” to be “angry.”  Of course their “anger” and “alienation” means they have to randomly kill 129 people.  There is a kind of Western supremacist, white eurocentric mentality to all this, namely that “we” can always do X or Y and therefore change the terrorist.  If we do “x”, then instead of wanting to kill people, Salah Abdeslam, Ibrahim Abdeslam and Omar Ismail Mostefai would have integrated.

Whatever kernels of truth to these various explanations, there is one major blind spot.  Much has been written, especially in the Middle East, complaining that the killing of 40 in Beirut last Thursday in an ISIS attack, did not receive the same outpouring as the slaughter in Paris.  These voices have a point, few people seemed to care about Beirut, just as few cared about the victims of the Sinai Russian airline crash, or vicious attacks in Baghdad or Kenya earlier this year.

But if there is Western hypocrisy in not caring enough about lives lost in Kenya or Beirut (Facebook didn’t create a special ‘I’m safe’ click for them), there is a much more alarming excuse agenda in the West to justify these attacks.

When ISIS bombed Beirut, did large number of Shia, who were the target, claim that it stemmed from Sunni “alienation” and that “terrorism has no religion” and “we must learn why they are angry at us.”  Did the Shia wonder “how did we create this situation with our policies.”  Was it “poverty” and “frustration” and a “lack of hope” that forced the murderers to kill people in Beirut?  No.

The same question was not raised during the genocide of Yezidis in Shingal in 2014 by ISIS.  If ISIS has to commit terror because ISIS are poor and alienated, then why is it they had to murder thousands of Yezidi men and women, and sell thousands of women into slavery and rape?  When the ISIS members, some 10,000 of them from Europe, were raping and selling Yezidi women, was it the ISIS members who were “impoverished” and “alienated”?

How come the supposedly “impoverished” European Jihadists, have to go a thousand miles around the world to bomb Shia mosques in Kuwait?  When they murder and persecute the minority communities in the Middle East, like Yezidis, who is the “rich” and “poor” in this situation.  The Jihadist who is selling slaves, how did he become the one with “lack of hope”?  Did the US slave owners in the Old South have “lack of hope” and that forced them to go to Africa and enslave people?  Was the KKK “alienated” and had to lynch people?

When the excuse agenda comes forward and asks “why are they angry”, why doesn’t it apply the same standard to the Middle East.  Why were 10,000 European-born Jihadist volunteers for ISIS, “angry” with Yezidis.  What did the Yezidi ever do to a French Muslim or British convert like Jihadi John?  Did they Yezidi, living in Iraq, make them feel “alienated” in London?  When a man from Australia from a Middle class family comes to the Middle East and boasts of selling women into slavery and beheading people, why is he the “victim” of “Western policies”?

All terrorist attacks are unique, whether it is Mumbai, 9/11, Westgate, London, Madrid, Bali, Garissa, Baghdad, Beirut, Peshawar, Beslan, Moscow, Kano, Tunisia, Algeria, Shingal, Kobani, Ankara, Sinai or Paris.  But what is constant is the excuses for mass murder.  The murderer, who is almost always middle class, educated and privileged, becomes the “victim” and the victims are dehumanized.

Terrorism is primarily a result of privilege.  The worldview of terror is murder and dehumanizing.  Terrorists aren’t “alienated”, they are empowered, and they are the wealthier ones who want to take the life of others.  Their sense of entitlement and privilege causes them to want to commit wonton murder.  It was the same with the Red Brigades and Beider-Meinhof and going all the way back to the 19th century Anarchists. When they decided to kill innocent people, it was because the were privileged and they saw some cause as being more important than human rights.  Terrorism is not the weapon of the weak, it is the weapon of the strong. It takes incredible strength to decide to murder random people.  Most people do not commit terrorism, which illustrates how unique it is.  Only deep indoctrination, education and zeal, leads to major terror attacks.

The excuses and explanations are a deceptive explanation.  When you ask deeper questions, such as how it is possible that “poverty” leads people to massacre poor students in Garissa, or kids in Peshawar, the awful nature of the excuses are revealed.  The men who killed kids in Pakistan, or bomb Shia mosques or Ahmadi minorities, they are not “alienated”, they are killing the alienated minorities and harming the weakest members of society.