Between December 14 and 20 the US, its allies, partners and the Middle East have been shocked to see US President Donald Trump decide to withdraw from Syria and US Defense Secretary of Defense resigned. As more details emerge about the decision it leads to many extraordinary and disturbing questions.

The decision came during a phone call with Turkish President Recep Tayyip Erdogan in which Trump was told that ISIS was 99% defeated and asked why the US was still in Syria. Trump, who had threatened to leave Syria before, agreed. According to reports, Trump told John Bolton to “do it” and start the process of leaving. It doesn’t appear Trump spoke to anyone else, not Secretary of State Mike Pompeo or Secretary of Defense James Mattis. He also didn’t consult with the 74-country anti-ISIS Coalition, or the UK and France which have forces in Syria. He didn’t bother to even address the main US partners on the ground, the Syrian Democratic Forces, who have lost thousands of fighters as casualties during the anti-ISIS war.

This is an extraordinary way to wrap up a four year war against ISIS that began with US President Obama ordered airstrikes in August 2014. Along the way the US has not only helped the mostly Kurdish forces in eastern Syria resist the ISIS advance, but Washington worked to push for the creation of the SDF umbrella group that liberated Raqqa and other areas, eventually coming to control a third of Syria. This was a remarkable campaign, perhaps one of the most successful the US has fought in recent years. With few casualties the US used a minimum number of soldiers to inflict maximum losses on ISIS. This was a success.

The US sought to convey one message on the ground in Syria to its partners, while conveying a second message to Ankara, which was consistently concerned about the US partnership with the YPG, which Turkey views as the Syrian version of the PKK. The US would say to Turkey that the conflict in eastern Syria is “temporary, transactional and tactical.” US envoy James Jeffrey, for instance, said this openly in November and December.

But to the US partners, the SDF, the message was different. Brett McGurk and others spoke about stabilization. US Chairman of the Joint Chiefs Dunford spoke about training tens of thousands of security and had said in the fall of 2018 that the US was only 20% towards that goal. Quietly the US indicated it could be in eastern Syria for ten years or until reconstruction, de-mining and other efforts took place. The root causes of ISIS had to be address. The Geneva process had to be on track. Iran had to leave. These were the US policy goals spelled out up until the decision to leave. In fact, after Trump had spoke to Erdogan, Jeffrey went to the Atlantic Council and spoke about the future of the SDF, saying it should become a political party in Syria. Three days after Trump’s decision, the man responsible for US engagement in Syria, didn’t know about the upcoming announcement. He noted that the US couldn’t ally with a “substate” group, but made some interesting comparisons.

He compared Turkey’s concerns to how Israel views Hamas or Hezbollah, or how Saudi Arabia views the Houthis. He also made comparisons to the development of northern Iraq. The SDF felt they were on the path perhaps to end up like the Kurdistan region in northern Iraq, albeit with the overlay of their left-leaning ideology. But the administration also had a janus face here. Jeffrey openly said that the PYD, the political wing of the YPG, was the Syrian version of the PKK. The US also announced new bounties on the heads of the PKK to placate Turkey.

But even these comparisons lead to questions. If the US views the SDF area as similar to the KRG then why not seek to help shepherd it to be part of the Syrian government? Why walk away totally and abandon the Geneva process to Turkey, Iran and Russia, as the US has done.

Second, if the US thinks that the PYD is basically the PKK and a terrorist organization then why doesn’t the US treat it the way it does Gaza or Hezbollah in Lebanon? For instance the US would be outspoken about a unilateral Israeli invasion of Gaza or Lebanon. Even under Trump, there would be discussions about this. In eastern Syria the US has not only decided to walk away from its partners, but also appears to give a blank check to Ankara to do what it wants in eastern Syria. Yet when it comes to Yemen or Lebanon or Gaza, the US has worked on ceasefire agreements and has had a real policy. In Syria the policy is a total reversal, from partnership, to nothing.

America’s worst nightmare is to have reliable allies — like the Kurds who have fought so bravely against ISIS — abandoned and destroyed.https://t.co/PQjFTbGCAc

A symbol of the new US “nothing” policy for eastern Syria is the total silence from Pompeo, Bolton and others. They sought to highlight details about Iran and Albania as the crisis unfolded. In a press conference Pompeo decided the whole of four years of US work in eastern Syria and the complex relations with Turkey during that period, including observation posts and joint patrols, could be summed up as There is a lot of history” between the Turks and the Kurds and “you shouldn’t enter that debate today.”

So the US went from serving side by side against ISIS, to “let’s not discuss it.” The US acts like an ashamed man caught cheating on his wife or something, in suddenly being silent. The silence is total from Washington. There are numerous opeds and statements by Senator Graham and some others. “We will hold Turkey accountable for any actions to destroy America’s Kurdish allies who have fought so bravely against ISIS.” He is shocked. “Mr. President, we will never have partners in the future. Our nation is better than this. Please reevaluate the Syrian withdrawal strategy…As to the status of our Kurdish allies, the Administration has yet to tell the American people what happens to the Kurds – who fought so hard for us – when we leave. Is there a plan to protect our allies post withdrawal? Need answers now.”

But Graham’s words are falling on deaf ears. Mattis also resigned, but his resignation didn’t touch on specifics, only discussion of respecting allies. The US administration seems like it has gone into a shell. It has no answers and has total silence. Those who fought along side the US for four years have the cold shoulder and haven’t been spoken to. US forces apparently are also dismayed. How can they look their partners in the face now? Although some have argued for the US helping shepherd in some kind of autonomy in eastern Syria, the way the US has announced this doesn’t lead to any respect for US policy or strength now. The US is seen as totally unreliable. It doesn’t stick by any of its words, its policy speeches are meaningless. It doesn’t even tell its friends and allies what it is doing.

If the US had wanted to bring in some kind of autonomy in the east it could have begun working on this. But walking away and closing up NGOs and other details of the stabilization process, doesn’t lend itself to accomplishing everything. Once you fold the cards at the table and show your hand, you can’t go back. The US decision even shocked Turkey. Turkey says that ISIS is defeated and that it will launch an operation to return the area to its true owners.“We are determined to turn the east of the Euphrates into a peaceful and livable place for its true owners just like the other areas we have made secure in Syria…We say once again that we will not allow a terror corridor along Turkey’s borders.” 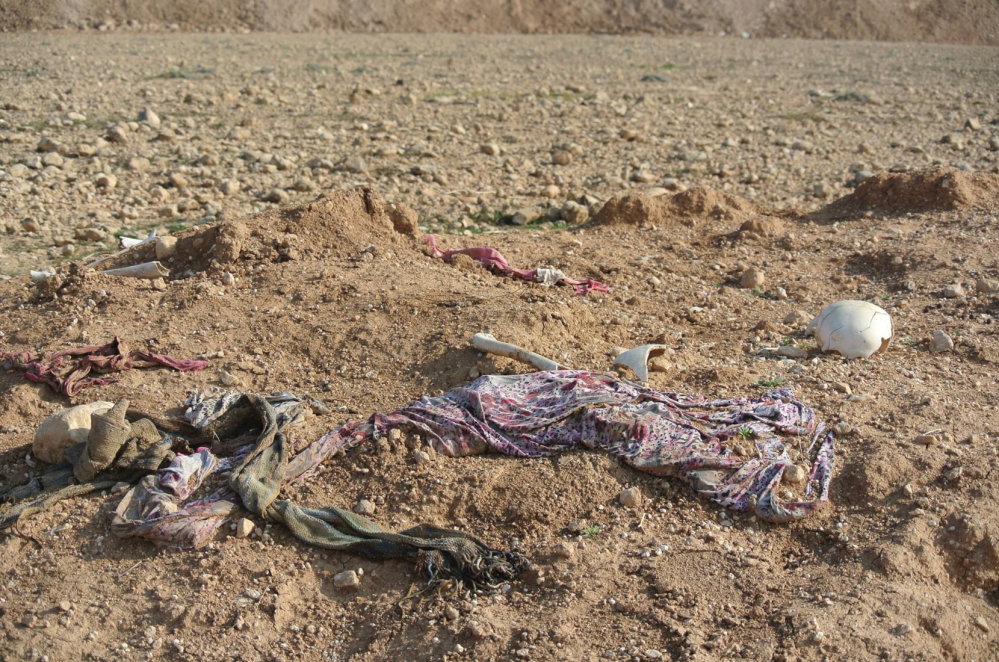 What about the Yazidi genocide?

The US launched the campaign against ISIS to stop the genocide of Yazidis. The partners in eastern Syria that the US came to work with, the YPG, were the main group that helped save the Yazidis from genocide in August 2014 by creating a corridor for them to escape. While Turkey may view the YPG as the same as the PKK, the reality is more nuanced. The US bifurcated its policy, viewing the PKK as terrorists while working with the YPG.

Turkey knows well the bifurcation, because it also does it. Turkey speaks to Hamas and does not view it as a terrorist organization, even if Turkey condemns terrorist acts. Turkey has relations with Israel. Even when that relationship was warmer, before 2009, Turkey felt Hamas could play a positive role in a peace process. How is this different than how the US has relations with Turkey and also worked with the YPG in Syria. In Turkey the US offered bounties for the PKK. In Syria the US worked to create and work with the SDF, not the YPG, so the US could distance itself from the PKK. The US policy is therefore complex and has contradictions, but one cannot ignore the reality, which is that those Kurdish fighters who saved Yazidis and stopped ISIS are heroes and they should be remembered, presented and treated as such. But the US has not come through for them. It appears to be tossing them aside as if they never existed. This is made easier by the fact that the US never invited the SDF leaders to Washington and even tried to avoid holding public events with them in Syria.

It is as if a genocide happened, people stopped the genocide, and now history will simply write them all out of the story. What genocide? No investment has been made in Sinjar, where 400,000 Yazidis fled in 2014. No investment in remembering the genocide. No reconstruction. No help for the IDPs. Not even any investment to find the 3,000 missing women and children. What ISIS did in 2014 was horrific, not just systematic killing, but slavery and mass rape. And ISIS was aided by 50,000 volunteers from around the world. Around 3,200 of those ISIS members and their families are held by the SDF in Syria. And now the idea is to just turn the back on them and pretend they aren’t there.

While many commentators appear to recognize the problem, no one seems to recognize what to do. Most of the European countries are good at making statements, but don’t do anything. The UK and France are unclear as to what they will do next. NATO and the EU didn’t speak up about the Turkish operation in Afrin, basically saying that Syria is a place where every country can do what they want. This is part of the cynical 21st century policies of not trying to do anything because of fear of getting involved. Whether it is the lip service about Russian actions in Crimea, which basically mean Russia can do what it wants, to Syria, or even Yemen, the true story is that the country willing to do the bombing and fighting can do as it pleases. This is a Hobbesian world.

The decision to help stop the genocide in 2014 was the right one. But since then the Coalition hasn’t followed through. Now a whole piece of the area the Coalition operates in, is being walked away from.